The NPH and why evangelical Millennials can’t trust their elders

The NPH and why evangelical Millennials can’t trust their elders June 19, 2012 Fred Clark

Michael-in-Norfolk posted this graphic from Neil Patrick Harris’ appearance on The Colbert Report. 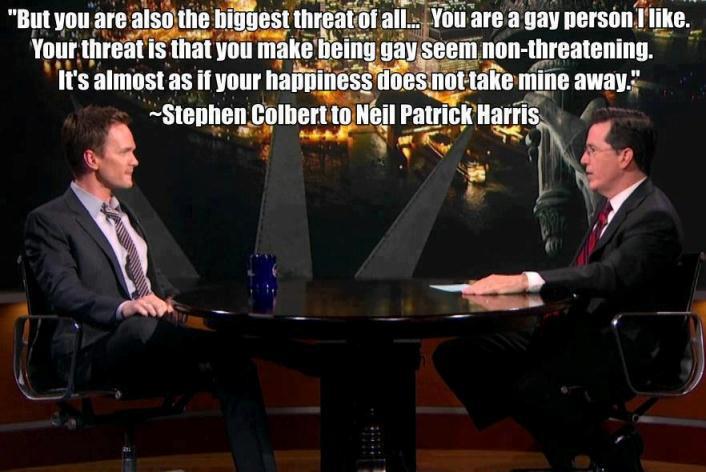 If people find out that we LGBT individuals are basically just like them, that we have similar hopes and dreams and, God forbid, that we have normal functioning families, the Christianist anti-gay jihad falls apart. … It’s easy to hate and oppose something/someone unknown. It’s far harder when the targets of hate are one’s friends, neighbors and family members.

This, I believe, is a huge part of the reason that Millennials are increasingly skeptical about the church, and particularly the evangelical Protestant parts of the church.

Lying is not a good way to earn or to keep trust. Particularly not when the lie is one that is so easily refuted just by meeting actual people — those friends, neighbors and family members Michael mentions. Millennials have grown up knowing and knowing of many LGBT people and they have seen, firsthand, that these friends, neighbors and relatives are nothing like the portrait painted of them by the older generation of evangelicals.

I wrote about this last year in a post discussing “the generational chasm that seems to have opened in two of the vanguard groups opposed to equal legal rights for GLBT people: Republicans and evangelical Christians”:

Polls of both groups continue to show a large disparity between the antigay views of older members and the lack of such sentiment among younger members. Those younger Republicans and evangelicals recognize the need for non-sectarian legal arguments in support of nonsectarian legal discrimination, and the lack of such arguments from their older counterparts is a big part of the reason that older, antigay Republicans are now seeing, for example, their own daughters recording videos on behalf of New Yorkers for Marriage Equality.

The older generation of anti-gay evangelicals says that this amounts to a disturbing “moral relativism” on the part of these younger Christians, but what the younger Christians see is an immoral and deeply ingrained dishonesty on the part of these older evangelicals who continue to bear false witness against GLBT people. The “moral relativism” they see is the older generation’s willingness to say false things in pursuit of a political agenda — the ends-justifies-the-means reasoning of those who think lying about GLBT people is somehow justified in pursuit of the supposedly greater good of “traditional values.”