The Left Behind novels are Very Bad. But they are also very influential.

From classrooms, to courtrooms, to the U.S. Senate and all ships at sea, these horrible, heretical books are shaping American public policy.

Tim LaHaye is changing your world.

Item No. 1: Louisiana parents fear “mark of the beast” in school cafeteria.

“A Louisiana school district is trying out a new biometrics device in the hopes of speeding up the lunch line,” vorjack reports. Uh-oh, here it comes:

Many parents felt that way. … Sonnier says she’s against the palm vein scanner because of her beliefs.

“As a Christian, I’ve read the Bible, you know go to church and stuff,” said Sonnier. “I know where it’s going to end up coming to, the mark of the beast. I’m not going to let my kids have that.”

These were all denounced and opposed by self-proclaimed Christians who had “read the Bible,” and, “you know go to church and stuff.” What they really meant was that they had read books by Hal Lindsey and Tim LaHaye. Or maybe just seen part of The Omen on cable. You know, Christians.

Agenda 21 has become a right-wing bogeyman based on the false claim that it constitutes some kind of threat to local or national sovereignty. That claim is due to it being an international effort through the United Nations, which is suspect because all good Christians who read the Bible and, you know, go to church and stuff, know that the U.N. is just biding its time until the Antichrist uses it to establish a tyrannical one-world government. 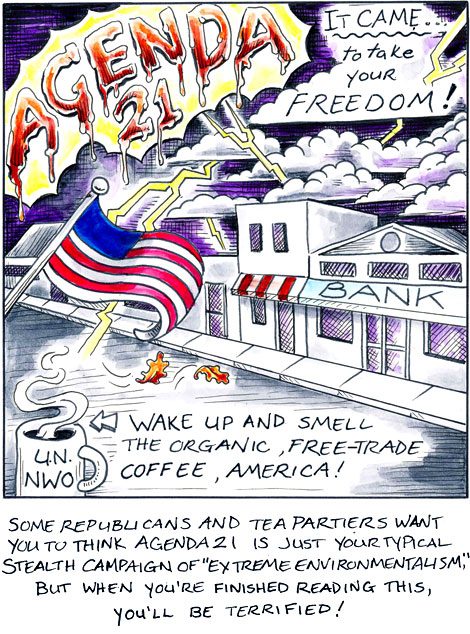 Because of Nicolae Carpathia.

And because of the John Birch Society — the far-right group whose paleoconservative conspiracy theories are embodied in long-time JBS-member Tim LaHaye’s End Times novels. According to the JBS, Agenda 21 seeks “a profound reorientation of all human society, unlike anything the world has ever experienced.”

Thus efforts to reduce traffic jams are twisted into “the Antichrist is coming to take away America’s cars!!1!” It is no coincidence that anti-Agenda 21 hysteria predominates in the same Bible-belt regions where LaHaye’s “Bible prophecy” heresy is widespread.

You might laugh when you hear red-faced Left Behind fans and Birchers shouting such things at a town council meeting. But it’s not as funny when you’re stuck in traffic due to common-sense regional planning being opposed as the New World Order.

And it’s not as funny when Texas sends Ted Cruz to promote this nonsense in the U.S. Senate. The Senate doesn’t need any more of this, because …

Item No. 3: The U.S. Senate spiked the Law of the Sea Treaty in order to foil the Antichrist

As Steve Benen noted last month, the treaty was:

… negotiated 18 years ago, and ratified by 161 countries around the globe. Here in the U.S., it’s been endorsed by the Clinton administration, the Bush administration, the Obama administration, business leaders, the State Department, the Pentagon, the Joint Chiefs, and specifically U.S. Navy leaders who, as Josh Rogin explained, see the measure as necessary “to allow the United States to fully participate in the growing multinational system that governs the open seas.”

Yet U.S. participation in the treaty was nixed due to:

… far-right activists, who had irrational fears, based on little more than paranoia, that the measure would give the United Nations power over American laws. Fox News and other conservative media outlets soon began trumpeting the talking points, which were aggressively pushed by John Bolton and other extremists, that our “sovereignty” was being put at risk by treaty backers, including the U.S. military.

Item No. 4: A sitting judge in Lubbock County, Texas, believes he is a member of the Tribulation Force

Tom Head — a judge, an actual judge who presides over actual cases in a court of law — is campaigning for a local property tax hike to hire more county police. Head, a Republican, says the additional police will be necessary to overthrow the one-world government he expects will quickly arise should President Obama be re-elected:

“[President Obama] is going to try to hand over the sovereignty of the United States to the U.N. Okay, what’s going to happen when that happens? I’m thinking worst case scenario here. Civil unrest, civil disobedience, civil war maybe. We’re not just talking a few riots here and demonstrations. We’re talking Lexington-Concord take up arms and get rid of the guy.

“Now what’s going to happen if we do that, if the public decides to do that? He’s going to send in U.N. troops — with the little blue beanies. I don’t want ’em in Lubbock County. Okay. So I’m going to stand in front of their armored personnel carrier and say, ‘You’re not coming in here.'”

(Update: An explanatory note from Texan Charles Kuffner — “A ‘County Judge’ is not a person who wears a robe and conducts trials, though they do have the authority to do so in courts that don’t hear the major felony or civil cases. A ‘County Judge’ presides over the ‘Commissioners Court’,’ which is the governing body for counties in Texas. It’s a little like being the Mayor of a county.”)