Mitt Romney says many, many things that are not true. He says this despite being in possession of the correct facts of the matter. 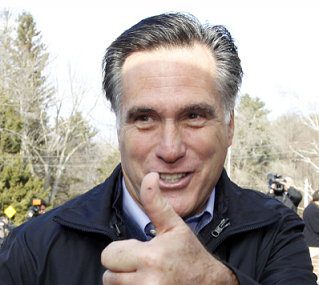 Which is to say that Mitt Romney lies. A lot. He lies more than any other national candidate for office in my lifetime. And I was born before the Nixon administration.

Here are 30 — 30! — of Benen’s weekly “chronicling” posts. These are all backed up and sourced. These are not assertions, interpretations or allegations. These are facts, actual instances.

Click those links. Read the lists. List after list of lie after lie. Hundreds of them — 533, to be exact, although Benen does not make any claim to providing a comprehensive chronicle.

This is unprecedented. “We’re not going to let our campaign be dictated by fact-checkers,” Romney’s pollster, Neil Newhouse, said.

This has produced what James Fallows calls the “post-truth” age — a relentlessly dishonest onslaught of brazen falsehoods with which the media and the political system are struggling to cope. What do you do when every article, every “fact-check,” every arbiter denounces a lie and corrects it, but then a politician just keeps repeating it?

One of the weirder aspects of this for me is watching this unfold in the politically conservative culture of my evangelical world. The most partisan evangelical conservatives are also those most likely to rant against “relativism” and to trumpet their status as defenders of “absolute truth.” Those same folks will dismiss this post — and all 30 of Benen’s posts above — as mere partisan attacks without ever bothering to examine the 533 factual instances of Mitt’s mendacity, chronicled.

That’s the only cognitive defense they have, I guess. Jam fingers in ears and shout la-la-la-you’re-being-partisan!

Because, you see, the fact that Mitt Romney said something he knew to be false is a partisan fact. And the fact that he has done this at least 533 times in the past 30 weeks is also partisan.

I suppose the other approach for Romney defenders who cannot bear to face the fact of those 533 facts will be to angrily pore over all of Benen’s lists, reading each one with a lawyerly eye.

Have at it. Please. Cherry-pick. Spin. Split hairs. Hand-wave away whichever lies you wish as mere misdemeanors and not full-fledged felonies against honesty.

But how many of those charges do you think you can get dismissed? 10 percent? 20 percent? Maybe, if you’re that sort of person and you work really hard at it — if you’re willing to get even more pedantic and semantic and technical than even you are usually comfortable with — maybe you could half convince yourself that 50 percent of those lies somehow shouldn’t really count against Romney.

That still leaves more than 260 lies. That still leaves Mitt Romney as a convicted liar, 260 times over. And at that point you’ll have to join your friends with their fingers in their ears.

Because everyone knows. Mitt Romney lies. A lot. That is what he does. That is who he is. And friend or foe, he does not care if you know it.

August 29, 2012
Loving the Bible too much to 'literally' ignore what it says
Next Post