What would it mean if Jesus had been married?

One of the odder stories this week involves a small scrap of Coptic papyrus and what it says about Jesus.

Karen King, a scholar well known for her work on the phenomenon usually referred to as “Gnosticism,” has come into possession of and has been studying a Coptic papyrus fragment which is likely to be authentic, dates from around the 4th century, and has Jesus mention his wife. (King has posted online a pre-publication version of an article [.pdf] she has written about the text.)

It is important to note that this is clear evidence only of one thing, namely that the author of this text, centuries after the time of Jesus, believed that Jesus had been married.

Anything beyond that is speculation, although there certainly do seem to be points of intersection with, or echoes of, other previously known extracanonical texts referring to Mary Magdalene.

The phrase in question, cut off by the edge of the fragment, reads: “Jesus said to them, ‘My wife …'” 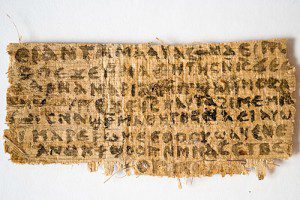 That’s tantalizing. Reading that, quite a few commentators immediately thought of Dan Brown and The Da Vinci Code. I immediately thought, instead, of Henny Youngman and Rodney Dangerfield. And now I’m hoping for the future discovery of another Coptic fragment beginning: “… the disciples said unto him, ‘How bad a cook was she?'”

Without more context — the rest of Jesus’ sentence, the subject and genre of the 4th-century writers’ text, etc. — this fragment doesn’t really tell us much. I see four broad possibilities:

1. Jesus was married. Knowledge of this was preserved for four centuries, either through oral tradition or in texts now lost to us, but he really was married.

2. Jesus was not married, but some people thought he was, including the writer of this Coptic fragment.

3. Jesus may or may not have been married, but this fragment doesn’t speak to that because it is the work of the 4th-century equivalent of David Barton — a polemicist with some other agenda that trumped historical accuracy.

4. Jesus may have been speaking metaphorically. He may have been saying something like, “My wife is whoever hears the word of God and does it.” That’s exactly what he said in Luke 8:21 about his mother and brothers. And it wouldn’t be far from the imagery of his parable about bridesmaids. Alas, such a statement wouldn’t indicate one way or the other whether he had an actual wife (although he did have a mother and brothers).

All of those seem possible, and I’m sure there are other possibilities as well. I have no idea which of these is the most likely, but it’s clear which is the most interesting.

What if it turns out Jesus really was married?

Throughout most of Christian history, we have assumed he wasn’t. The canonical Gospels and most of the extracanonical ones don’t say anything about Jesus having a wife. Neither does Paul — who wrote his epistles much earlier. Had Jesus been married, his wife would likely still have been living when Paul was writing those letters.

But just because none of these texts mention Jesus wife doesn’t mean he was not married. Consider the apostle Peter’s wife. Mark’s Gospel tells us that Jesus healed Peter’s mother-in-law. If Peter had a mother-in-law, then he must have also had a wife, yet she isn’t mentioned in that story, or anywhere else in the Gospels, in Acts, or in the epistles attributed to Peter. The only other mention of her is in one of Paul’s letters, when he says, in passing, that apostles should take their wives along like Peter does (see 1 Corinthians 9:5).

So on the one hand, if Jesus had been married, then it seems like his wife ought to have been mentioned as being present at least at his death and burial. But on the other hand, if Peter’s wife could be invisibly present throughout the book of Acts, then the same thing could be true for Jesus’ wife in the book of Luke.

Of course the assumption that Jesus never married isn’t entirely due to the silence of the canonical texts. It may also be due in part to early Christian notions about the evils of the material world, which led to a revulsion toward sex and an idealization of virginity. (King’s Coptic fragment may have been a reaction against exactly that.)

So while this latest 4th-century find offers next-to nothing in the way of evidence that Jesus may have been married, it’s still a possibility that he was. So what would happen if we did find evidence proving that was true? What if Jesus was married?

Let me suggest four implications I think this would have for Christianity:

1. It would help to flesh out our understanding of the incarnation.

Jesus was fully human. Sexuality is part of what it means to be fully human (even for lifelong virgins and celibates). But the church has often balked at accepting that Jesus was as much of a sexual being as any other human. That comes dangerously close to suggesting that he was only fully human above the waist. That’s a kind of soft Docetism — a denial of Jesus’ full humanity. (Or is that Monophysitism? I get my early heresies mixed up). This reinforces and is reinforced by another dangerous notion — that Jesus could only have been sinless if he remained a virgin, and thus that sex with his wife would have defiled him because all sex defiles and is icky, dirty and nasty. Both of these ideas together deny Jesus the name Emmanuel. They suggest that God has never been entirely “with us” — only with us up to a point.

2. We would need to re-read stories of Jesus with fresh eyes.

Like most Christians, I have always assumed Jesus was not married. If it turned out he was, I would want to re-read the Gospels carefully, keeping that in mind. Would it change the meaning of those stories? Not much, I don’t think. But I would be very interested to read someone with expertise on first-century Judaism discussing how Jesus’ many encounters with women — the Samaritan woman at the well, the Syro-Phoenician woman, the woman with the hemorrhage, the woman with the oil, the woman caught in adultery, Mary and Martha of Bethany, Mary Magdala, Susanna, etc. — might take on new shades of meaning if we read them as involving a married rabbi.

3. Celibate priesthood would seem even sillier.

The idea of a celibate priesthood has always been weird. There’s no biblical case for it, and no good biblical defense of it. Its many downsides have always outweighed its few purported benefits. If we somehow learned that Jesus was married, the idea would quickly become wholly indefensible and unsustainable. I imagine it would be abandoned in short order. That ought to happen anyway, even if we somehow learned instead that Jesus definitely never married.

4. The unique place of Mary, the mother of Jesus, would change.

I originally only had three items in this list, but I spent this morning at St. Mary Church in Conshohocken, Pa., an old and ornate shrine to the blessed virgin. In a patriarchal church, Mary serves as a kind of abstract ideal of the sort of woman that the patriarchy can tolerate. If we someday learned that Jesus was married, then his mother might have to share that role with his wife.

It’s possible that would lead to the church becoming a bit less patriarchal, but probably not. The cult of virginity (in both its Catholic and Protestant forms) would live on in new forms. The same forces that conspired to turn Jesus’ brothers into his cousins so that his mother could declared a perpetual virgin — a madonna rather than that other thing — would likely create a parallel myth to attribute perpetual virginity to his wife as well. Sure, Jesus was technically married, they would say, but somehow he and his wife — just like poor Mary and Joseph — never did what married people do.

In other words, if it should ever be found, evidence that Jesus was married is more likely to inspire new myths to support the patriarchy than it is to dispell the old ones.

Supreme Court To Reverse Decision on Roe V....
Washington, DC - Just a day after yet another mass shooting in...
view all Progressive Christian blogs
What Are Your Thoughts?leave a comment
Copyright 2008-2021, Patheos. All rights reserved.