Giving names to the animals

I’ve been thinking about that one lately as I’ve tried to give names to all the animals who dwell in or visit my little patch of Chester County — such as the pickerel frogs like the one pictured here. That photo is by Wayne Fidler, from the Pennsylvania Herp identification site — a terrific resource. 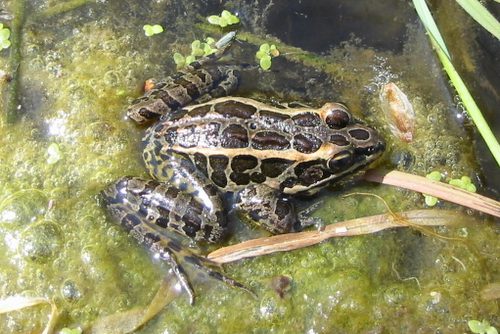 (I found my way there while failing in a long-shot attempt to identify a tiny snake who also visited our yard. Unfortunately I can’t describe it very well except to say it was dark, shy, elusive and really fast.)

Dylan’s song comes from an equally odd/delightful Bible story — or really a story within a story. The larger story there is the creation story from Genesis 2. This story is quite different from the one in the previous chapter. That one, the more famous six-day version, is more sweeping and cosmological. It’s a story about God creating the whole universe. The second version is more intimate in scope and in action. It’s about God making a world for humans to live in. In the first story, God speaks the cosmos into being. In the second, God forms humans out of the dust of the earth and then kisses us into life.

In that first story, God makes humans — “male and female,” it doesn’t say how many, possibly a “multitude” — on the sixth day, after everything else has already been created. In the second story, God makes a garden, and then grows a man in that garden. And then God sets about making other creatures to keep this lone human company:

I love this little story within a story. It portrays God as delighting in creation, and particularly as delighting in seeing what humanity makes of all these amazing creatures. God “brought them to the man to see what he would call them.” I love the giddy enthusiasm of God in this story. God can’t wait to find out what the human thinks about all the “cattle and the birds of the air and every animal of the field.”

This story suggests that our curiosity about and interest in all creatures great and small is something that delights God. The God portrayed in this story would love David Liittschwager’s photographs for his One Cubic Foot project.

Liittschwager isn’t just giving names to all the animals, he’s capturing beautiful portraits of them too. And now he’s taking his project into the water, capturing the dizzying diversity of creatures that live there as well.

“The idea of biodiversity is a little abstract when you start talking about these huge numbers of creatures,” Liittschwager said. “There may be as many as 40 million species we don’t even know about — and that doesn’t even take into account the really little things.”

The writer of that story in Genesis 2 had no idea about those “really little things.” None of us humans did until we built our first microscope in 1590. If the writer of Genesis 2 was correct about the character of God, then this invention must have pleased God a great deal.

Once we were able to get a glimpse of the universe of tiny creatures invisible to the naked eye, I’m sure that God was eagerly waiting “to see what we would call them.”

The trap of being an A+ Christian (and...
Growing up a well-trained evangelical, I knew my Bible. I knew Luther's...
view all Progressive Christian blogs
What Are Your Thoughts?leave a comment
Copyright 2008-2021, Patheos. All rights reserved.