‘The Right Club’ and what offends God

Hemant Mehta tells us about an atheist billboard in Kentucky and the tribalist response from a local church. 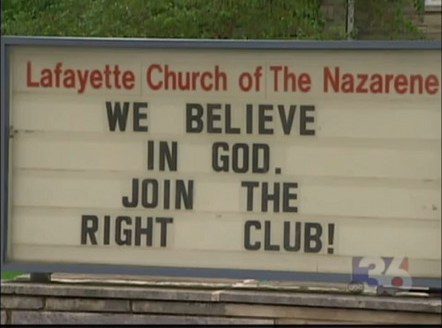 So a local Nazarene church put up a sign that says, “We believe in God. Join the right club!”

So much wrong there in the multiple meanings of that word, “club.”

The church’s pastor said Christians like him were offended by the billboard. He seems to assume we’ll all understand why such offense is appropriate, although it’s not obvious to me.

The sign’s message, essentially, is: 1) Atheists exist; and 2) If you are an atheist, you’re not alone. Both of those things strike me as unremarkably and inoffensively true. And yet, for some reason, Pastor Jared Henry of the Lafeyette Church of the Nazarene finds these unremarkable statements of fact offensive.

Henry also said that God “was probably offended” by the billboard, because God, apparently, was unaware of the existence of such unbelievers until one day recently when God was stuck in traffic on Wilhite Drive in Lexington and then looked up in horror to see this billboard.

Henry, of course, isn’t really worried about God so much as about Team God — the tribal clique to which he pledges his allegiance. The sad comeback he rushed to put up on his church sign — “the right club,” oh snap! — has nothing to do with defending God, of course, but only with scoring points for Team God.

Unfortunately for the team, Pastor Henry trips over his clobber verse in discussing the sign with a local news crew: “Proverbs says a fool says in his heart there is no God.”

Thanks for playing, pastor, but that’s not Proverbs.

It’s Psalm 14, actually. The first verse of that psalm — “Fools say in their hearts, ‘There is no God'” — is often invoked as a rebuke to atheism, but this psalm isn’t really about that. It’s not about what we “believe,” but about how we live. And specifically, about how we live in relation to others.

The psalm is a rebuke to those who live as though there is no God. And what does that look like? According to Psalm 14, that means devouring the poor (“treating people like a fast-food meal,” in Eugene Peterson’s translation) and “confounding the plans of the poor.”

For the psalmist here, to say “there is no God” means thinking you can treat people like objects with impunity. Belief in God, in this passage, mainly entails accountability for how we treat others. The “fools” denounced here are not condemned because of any intellectual “beliefs” about the existence or non-existence of God. They are not condemned for joining the wrong “club.” They are denounced because they foolishly think they’re going to get away with preying on the weak.

Here’s a bit more of Psalm 14 from Peterson’s “The Message” translation:

Don’t they know they can’t get away with this—
Treating people like a fast-food meal over which they’re too busy to pray?

Night is coming for them, and nightmares, for God takes the side of victims.
Do you think you can mess with the dreams of the poor?
You can’t, for God makes their dreams come true.

It has nothing to do with joining “the right club.” It has to do with how we treat others, regardless of what “club” they do or do not belong to. The psalmist is saying, essentially, that Instant Karma’s gonna get you.

Pastor Henry doesn’t seem to have read any of Psalm 14 except that first verse. He also got it mixed up with Proverbs.

As it happens, the book of Proverbs does have quite a bit to say about what God finds offensive. It doesn’t mention anything about billboards or tribal disputes between clubs, but it does say this “Those who oppress the poor insult their Maker, but those who are kind to the needy honor him.”

September 23, 2012 You better get yourself together
Recent Comments
91 Comments | Leave a Comment
"what is the tittle of this pic?(☆_☆)"
TerrorTrike 12/1 Flashback: Cizik culture
"This is reminding me of the guy from usenet who insisted that fiction was an ..."
Ross 11/30 Flashback: Victims
"I wish I could find the article where they confronted an irish bishop about the ..."
Ross 12/1 Flashback: Cizik culture
"especially if they have spooky powers and/or live in a paintinghttps://media.tenor.com/aXc..."
SmogMonster 12/2 Flashback: Ideomotor
Browse Our Archives
Related posts from slacktivist