More scenes from the class wars

“As you know I never duck the tough calls. So I went ahead and made the List.”

“Now I’m not quite sure how I feel about it.”

“From the looks of it, nothing short of an Roman Imperial cult — complete with their apotheosis as state deities upon their death — would satisfy them.” 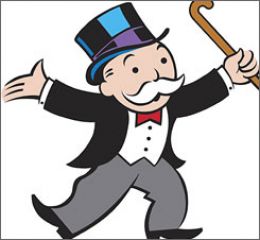 “The fairness of taxing more lightly incomes from wages, salaries and professional services  than the incomes from business or from investments is beyond question.”

“How is it that so many who seem to be such golden winners of life’s lottery manage to generate so much hatred, fear, and contempt for those who have fared less well?”

“Who better than me … to come up with programs to do away with Medicaid and Medicare.”

“When you see a PowerPoint presentation, usually the first thing you should do is put your hand on your wallet.”

“Let’s be blunt and acknowledge the biggest threat to the world’s biggest economy are the cranks and crazies that have taken over the Republican Party.”

“The conservative Media Research Center has posted a public letter urging supporters not to listen to non-conservative media.”

“All of this might be of interest only to historians if Strom Thurmond’s Republican Party had nothing in common with today’s. But it does.”

“He is discussing QEII and how interest rates will shoot up when it ends. It ended in July 2011.”

“This man is a lout. A shameless lout, who, among the supposed privacy of close supporters, reveals that he can conceive of no idea larger or more profound than self-interest.”

“As Mitt Romney said, 47 percent of the people that are living off the public dole, living off their neighbors’ hard work, and we have a lot of people out there that are too lazy to get up and get out there and get the ID they need.”

“You can’t justify taking food from the mouths of children — even to yourself — until you have sufficiently demonized those children, or at least their parents, so as to paint them as totally undeserving of even their small sliver of the pie.”