Fighting the beast: How can Clifford Russell be saved?

Fighting the beast: How can Clifford Russell be saved? October 8, 2012 Fred Clark

“What’s killing us is all these entitlements, we’ve got to get rid of all of them. All this welfare, food stamps, Medicare, and then big government health care on top of it, it’s all just too much! When do we say enough is enough?” 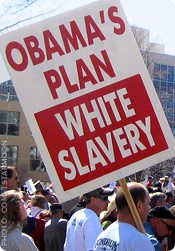 What do you mean, exactly, I ask him. You say people are suffering under Obama, don’t they need some help?

“No. No more help, enough is enough. People have to pick themselves up, take some responsibility. Why should we be paying for people’s mistakes and bad choices? All these illegitimate families just adding to the population, making all these bad decisions, then asking us to pay for it? It’s time to cut them off.”

I ask for some clarification: what do you mean, just starve them out? What if people can’t find work? Let them starve?

“Look, there’s always something you can do. You telling me people can’t make a choice for a better life? We have to help all of them? No. I’ll tell you what really need to do with these illegitimate families on welfare—give all the kids up for adoption and execute the parents.”

I stare at him and blink in a glaze of shock.

Just to be sure I heard him right, I ask him to repeat it, twice.

The reporter there is Christopher D. Cook of The Progressive, which printed his account along with a response from Clifford Russell, which Russell titled, “Socialistic Programs of Democratic Party Encourage People to Have Illegitimate Children.” Russell’s response was, I think, intended to rebut Cook’s portrayal of him, but winds up instead emphatically confirming it.

It cannot be our only response, and it cannot be our primary response, but at least a part of our response to people like Clifford Russell must be to offer them a chance to be saved — to find redemption, liberation and salvation.

Those are all religious terms, the language of spiritual rebirth and renewal. I can’t help but think that such rebirth may be the only hope for someone like this — a dramatic John Newton-like transformation in which this man who is lost can be found and this man who is blind learns to see.

But I’m not mainly thinking here of presenting Russell with an altar call. I’m thinking of the many different approaches that may be necessary to free him from the multi-pronged beast of lies, pride, hate, fear, willful ignorance, resentment and self-righteousness that have him so thoroughly captive. What can be done? What can be tried?

Education, surely, the presentation of better information — but how can that information be presented in a way that can penetrate the defensive shell the beast has constructed around him? Empathy, conscience, humor, prophetic truth-telling, relationship, breaking bread, ridicule, denunciation, forgiveness, protest, art, music and story all seem like weapons in our arsenal against the beast, but how can those weapons best be deployed?

What do you think? Is this naive? Impossible? Hopeless?

Can Clifford Russell be saved?