This is a picture of Cardinal Raymond Burke (via). 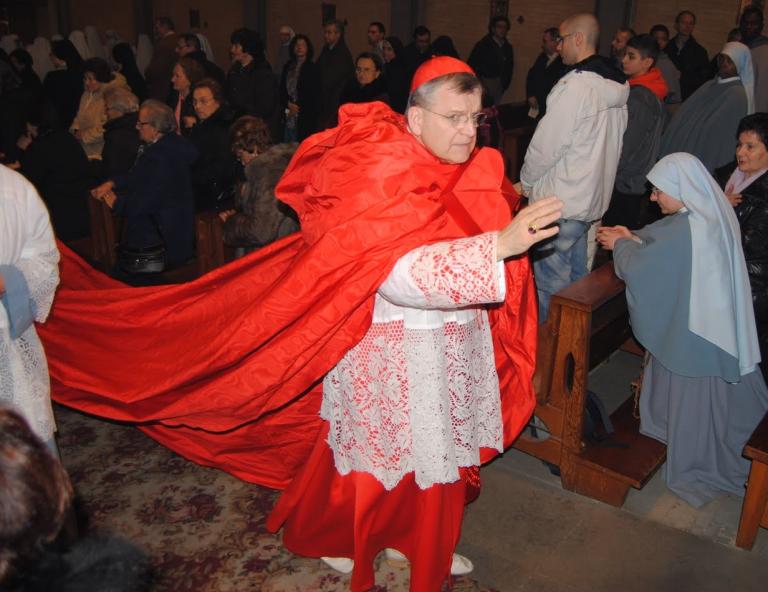 I’m sure that Burke could explain why he is dressed this way. I am not sure that I would understand that explanation.

Yes, I’m a Protestant from a very low-church Baptist tradition. And, yes, I’m sure that explains a measure of my befuddlement over this photograph. But not all of it, because, well, just look at it.

I can only guess that this is a ceremonial costume. It surely does not seem to be anything one might wear for practical reasons.

I mean, lots of professions involve particular or even peculiar and odd-looking outfits. Welders, for instance, wear visors, protective aprons and thick gloves. Surgeons wear masks, latex gloves and scrubs. Those are like costumes, but they serve practical purposes for the tasks that such workers have to do.

What sort of task might require this? What work could one be faced with that would cause one to stop and say, “No. No, I couldn’t possibly do that unless I were wearing a red satin train at least 20 feet long and some kind of antimacassar as a frock”?

So this must be ceremonial, which is to say that this outfit must be meant to be symbolic and meaningful.

I remain just as baffled by it. If this get-up is meaningful, what then is it meant to mean? What does such pageantry symbolize, signify or teach? I think it teaches several things, but I doubt those things are what Burke intends.

I have the unsettling suspicion that Burke’s explanation for this costume would have  something to do with ecclesiology, and thus, fundamentally, with Jesus.

This, even more than the sheer spectacle of the thing, is what confounds me the most. What I’m looking at here is a photograph of a man who, at some basic level, has accepted this calculus: Jesus, therefore 30-feet of flowing red satin and lace.

I imagine there must be many steps involved in that “therefore.” I do not know what all those steps might be, but I am certain of this much: many of them were bad steps — steps in a wrong direction. Or, at best, steps in a very odd direction.

Update: To clarify, the point here is not to say “Ha-ha-ha — look at that outfit,” but rather one step back from that, which is to wonder how such a thing can be worn without the expectation that it will and must, inevitably, cause others to goggle at it — to marvel at it with questions and reactions that have nothing to do with solemnity or reverence or with the body and blood of Jesus Christ.

I’m not confused by the idea of elaborately impractical ceremonial garb per se, or even by the idea that such garb may require additional explanation. A bishop friend once complained that awestruck witnesses of Pentecost settled on a metaphor of “tongues of fire” and that 2,000 years later that meant he had to wear a funny hat. I get that. The liturgical vestments Burke is pictured in on his Wikipedia page might go against the grain of my low-church iconoclasm, but such lovely symbols don’t bewilder me. The extravagant explosion of red satin and lace in that photo above does.

It seems to be the costume for a role in a story I do not know, yet it is being worn in the telling of a story I do know — and I cannot imagine how it belongs in that story. I suspect that including it in that story changes the story in a way that this story ought not to be changed. This is a costume for a story about money and power. That’s not the story he’s supposed to be telling.

October 8, 2012
When you tell them you still got to sell them
Next Post