Rep. Loy Mauch is one of three Republican incumbents in the Arkansas legislature who just got cut off from the state party’s campaign funds on account of publicly praising slavery.

I mentioned earlier today that Mauch is a Neo-Confederate loon. Jim Burroway has more on Mauch at Box Turtle Bulletin.

Here is the Republican legislator in 2003:

Nowhere in the Holy Bible have I found a word of condemnation for the operation of slavery, Old or New Testament. If slavery was so bad, why didn’t Jesus, Paul or the prophets say something?

This country already lionizes Wehrmacht leaders. They go by the names of Lincoln, Grant, Sherman, Sheridan, Custer, etc. These Marxists not only destroyed the Constitution they were sworn to uphold, but apostatized the word of God. Either these depraved infidels or the Constitution and Scriptures are in error. I’m more persuaded by the word of God.

If slavery were so God-awful, why didn’t Jesus or Paul condemn it, why was it in the Constitution and why wasn’t there a war before 1861?

The South has always stood by the Constitution and limited government. When one attacks the Confederate Battle Flag, he is certainly denouncing these principles of government as well as Christianity.

Yes, nothing says Jesus like treason in defense of slavery.

Burroway notes that most American Christians — even in the South — no longer share Loy Mauch’s fondness for slavery:

Most Christians have accepted the former position — including the Southern Baptists — even if they cannot bring themselves to acknowledge what that means for the principle of biblical inerrancy.

Which brings us back to yesterday’s post on Mark Twain and his essay, “Bible Teaching and Religious Practice.” I’m happy for the excuse to quote again from that essay, from Twain’s incisive section on slavery. I’m less happy, though, that quoting this turns out to be so timely:

The texts remain: it is the practice that has changed. Why? Because the world has corrected the Bible. The Church never corrects it; and also never fails to drop in at the tail of the procession – and take the credit of the correction. As she will presently do in this instance. 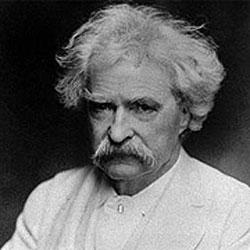 Christian England supported slavery and encouraged it for two hundred and fifty years, and her church’s consecrated ministers looked on, sometimes taking an active hand, the rest of the time indifferent. England’s interest in the business may be called a Christian interest, a Christian industry. She had her full share in its revival after a long period of inactivity, and [this] revival was a Christian monopoly; that is to say, it was in the hands of Christian countries exclusively. English parliaments aided the slave traffic and protected it; two English kings held stock in slave-catching companies. The first regular English slave hunter — John Hawkins, of still revered memory — made such successful havoc, on his second voyage, in the matter of surprising and burning villages, and maiming, slaughtering, capturing, and selling their unoffending inhabitants, that his delighted queen conferred the chivalric honor of knighthood on him — a rank which had acquired its chief esteem and distinction in other and earlier fields of Christian effort. The new knight, with characteristic English frankness and brusque simplicity, chose as his device the figure of a negro slave, kneeling and in chains. Sir John’s work was the invention of Christians, was to remain a bloody and awful monopoly in the hands of Christians for a quarter of a millennium, was to destroy homes, separate families, enslave friendless men and women, and break a myriad of human hearts, to the end that Christian nations might be prosperous and comfortable, Christian churches be built, and the gospel of the meek and merciful Redeemer be spread abroad in the earth; and so in the name of his ship, unsuspected but eloquent and clear, lay hidden prophecy. She was called The Jesus.