Apparently there’s some sort of political debate this evening

“In a weird attempt at ‘objectivity,’ the headline on the story reads ‘Political display at Morgan Hill home called racist”’ — because apparently a noose and watermelons are completely open to interpretation?”

“While some folks are obsessed with the silliness of ‘lynched’ chairs, racist t-shirts, and other nonsense, Mitt Romney has been offering up a mix of overt racism and covert ‘dog whistles’ against Barack Obama that collectively draw upon some of the deepest and ugliest stereotypes about black humanity.”

“Civil rights and labor groups have denounced the billboards as an attempt to intimidate minority voters.” 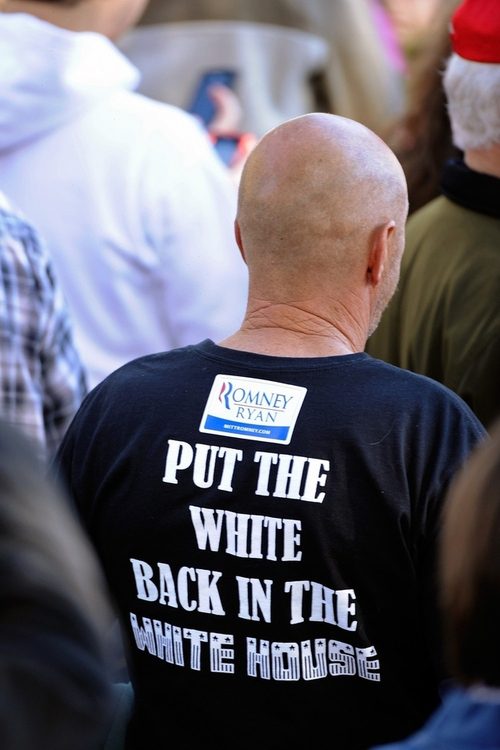 “Far too many people in this business have accepted the Etch-A-Sketch argument to the point at which whether something is true or not is measured by its effectiveness as a tactic.”

“When the book is written on the evolution of post-truth politics, this anecdote should be in the first chapter.”

“I have no desire to debate the pros and cons of those issues. I simply wish to point out that Romney changed his position on each and every one.”

“The 20-percent rate cut figure was plucked out of thin air for political reasons without regard to whether it was feasible.”

“We now officially know nothing at all about Mitt Romney’s tax plan.”

“Numerous studies over the past 10 years conclude that tens of thousands of Americans die each year because they lack insurance.”

“We pass a whole economy, society and environment to our children. Unless we have given them a really bad education, they would be crazy to opt for a government with a lower national debt in exchange for a weaker economy, a worse infrastructure or more damaged environment.”

“He said it was pathetic and comical to have the same person come up to you within only a half hour, have this person reintroduce himself to you, having absolutely no idea whatsoever that he just did this 20 minutes ago, and did not even recognize Glen’s face.”

“If Romney’s lips are moving and he’s talking about abortion, he is lying.”

“Because of Obama, I now have a wife who can get covered. But really, at heart, I’m a limited-government kind of guy.”

“There you have the six ‘studies’ on which the Romney campaign has based its defense of Romney’s tax plan. Individually and collectively they fail the task.”

“You still can’t drive cross country in 15 hours without speeding.”

“This isn’t because Romney or his advisors are bad at math. It’s because they’re lying, trying to get elected based on a fraud.”

“I am glad of all the support I can get anywhere, if I can get it without practicing any deception to obtain it.”