“The choice is clear,” the editors of The New Yorker magazine write in their endorsement of President Barack Obama.

The Romney-Ryan ticket represents a constricted and backward-looking vision of America: the privatization of the public good. In contrast, the sort of public investment championed by Obama — and exemplified by both the American Recovery and Reinvestment Act and the Affordable Care Act — takes to heart the old civil-rights motto “Lifting as we climb.” That effort cannot, by itself, reverse the rise of inequality that has been under way for at least three decades. But we’ve already seen the future that Romney represents, and it doesn’t work.

The re-election of Barack Obama is a matter of great urgency. Not only are we in broad agreement with his policy directions; we also see in him what is absent in Mitt Romney — a first-rate political temperament and a deep sense of fairness and integrity.

Actually, since this is The New Yorker, they’re not endorsing Obama’s re-election, but his reëlection.

I’m not inclined to co-operate with the magazine’s umlaut-happy style, but their summary of Obama’s accomplishments — even in the face of unprecedented obstruction — makes for much more informative and interesting reading than the breathless horse-race coverage of TV pundits.

The re-election of a President who has been progressive, competent, rational, decent, and, at times, visionary is a serious matter. The President has achieved a run of ambitious legislative, social, and foreign-policy successes that relieved a large measure of the human suffering and national shame inflicted by the Bush Administration. Obama has renewed the honor of the office he holds. 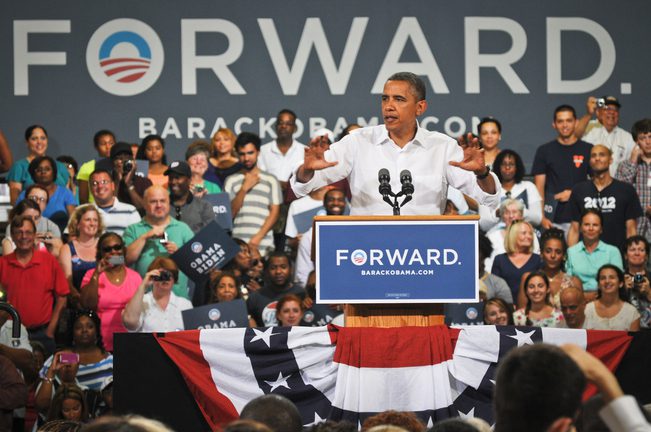 The American Recovery and Reinvestment Act of 2009 — the $787-billion stimulus package — was well short of what some economists, including Joseph Stiglitz and Paul Krugman, thought the crisis demanded. But it was larger in real dollars than any one of Franklin D. Roosevelt’s New Deal measures. It reversed the job-loss trend — according to the Bureau of Labor Statistics, as many as 3.6 million private-sector jobs have been created since June, 2009—and helped reset the course of the economy. It also represented the largest public investment in infrastructure since President Eisenhower’s interstate-highway program. From the start, though, Obama recognized that it would reap only modest political gain. “It’s very hard to prove a counterfactual,” he told the journalist Jonathan Alter, “where you say, ‘You know, things really could have been a lot worse.’ ” He was speaking of the bank and auto-industry bailouts, but the problem applies more broadly to the stimulus: harm averted is benefit unseen.

As for systemic reform, the Dodd-Frank Wall Street Reform and Consumer Protection Act, which Obama signed into law in July, 2010, tightened capital requirements on banks, restricted predatory lending, and, in general, sought to prevent abuses of the sort that led to the crash of 2008. Against the counsel of some Republicans, including Mitt Romney, the Obama Administration led the takeover, rescue, and revival of the automobile industry. The Administration transformed the country’s student-aid program, making it cheaper for students and saving the federal government sixty-two billion dollars — more than a third of which was put back into Pell grants. AmeriCorps, the country’s largest public-service program, has been tripled in size.

Obama’s most significant legislative achievement was a vast reform of the national health-care system. Five Presidents since the end of the Second World War have tried to pass legislation that would insure universal access to medical care, but all were defeated by deeply entrenched opposition. Obama — bolstered by the political cunning of the House Speaker, Nancy Pelosi — succeeded. Some critics urged the President to press for a single-payer system — Medicare for all. Despite its ample merits, such a system had no chance of winning congressional backing. Obama achieved the achievable. The Patient Protection and Affordable Care Act is the single greatest expansion of the social safety net since the advent of Medicaid and Medicare, in 1965. Not one Republican voted in favor of it.

Obama has passed no truly ambitious legislation related to climate change, shying from battle in the face of relentless opposition from congressional Republicans. Yet his environmental record is not as barren as it may seem. The stimulus bill provided for extensive investment in green energy, biofuels, and electric cars. In August, the Administration instituted new fuel-efficiency standards that should nearly double gas mileage; by 2025, new cars will need to average 54.5 miles per gallon.

President Obama’s commitment to civil rights has gone beyond rhetoric. During his first week in office, he signed the Lilly Ledbetter Fair Pay Act, which protects women, minorities, and the disabled against unfair wage discrimination. By ending the military’s ban on the service of those who are openly gay, and by endorsing marriage equality, Obama, more than any previous President, has been a strong advocate of the civil rights of gay men and lesbians. Finally, Obama appointed to the Supreme Court two highly competent women, Elena Kagan and Sonia Sotomayor, the Court’s first Hispanic. Kagan and Sotomayor are skilled and liberal-minded Justices who, abjuring dogmatism, represent a sober and sensible set of jurisprudential values.

October 23, 2012
Franklin Graham and the latter-day politicization of the BGEA
Next Post

October 24, 2012 No 5k for the biggest killer -- so does anyone really believe it's a killer?
Recent Comments
40 Comments | Leave a Comment
Browse Our Archives
get the latest from
slacktivist
Sign up for our newsletter
POPULAR AT PATHEOS Progressive Christian
1