Fighting for a system built to fail

Fighting for a system built to fail October 27, 2012 Fred Clark

Anti-science Republican Rep. Paul Broun is unopposed on the ballot for re-election to his U.S. Congress seat from Georgia. But Broun — the “lies from the pit of Hell” guy — is now facing a bipartisan challenge. Georgians who care about reality are waging a write-in campaign for Charles Darwin.

An ultraconservative congressman whose district includes the University of Georgia campus, Broun told a Baptist church last month that evolution, embryology and the Big Bang theory were lies spread by scientists out to erode people’s faith in Jesus Christ. He also claimed the Earth is roughly 9,000 years old, a view held by fundamentalist Christians based on biblical accounts of creation. 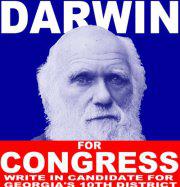 Now scientists are questioning whether Broun, a medical doctor and a Baptist from Athens, should serve on the House Science, Space and Technology Committee if he rejects widely accepted scientific ideas. And a talk radio host in nearby Atlanta is trying to rally voters to cast write-in votes for Darwin, the English naturalist who first published his theory of evolution in 1859.

Religious fundamentalists like Broun damage the Republican brand, said Neal Boortz, the libertarian-leaning radio host who has a strong following among Georgia conservatives.

… The write-in campaign is tongue-in-cheek, said Jim Leebens-Mack, a plant biologist at the University of Georgia who started the Facebook page. But its supporters hope Darwin gets enough votes to pressure Republicans into removing Broun from a leadership post on the House science committee.

“I’d think the Republican Party would want to put a serious legislator in this seat rather than have Paul Broun,” Leebens-Mack said.

Seth Andrews and a group of skeptics visit Ken Ham’s Creation Museum in Kentucky and share what they learned. I believe in God and I love the Bible, but I agree with nearly all of what Andrew & Friends say in this video. (And boy does Andrews ever have a great voice for narrating videos.)

Today is my wife’s birthday, and also my dad’s. Tomorrow is my oldest daughter’s. In all the excitement, I completely forgot all about Tuesday’s big day — according to Bishop Ussher, October 23 is the birthday of the universe. So let me wish a belated happy 6016th birthday, to everything.

Ussher, patron saint of young-earth creationists, “calculated” that the universe was created in 4004 B.C. — or, roughly 5,000 years after the city of Jericho was settled. So according to Ussher’s “math,” that makes the universe a mere 6,016 years old. (Sure, every piece of evidence from everything makes it look much older — closer to 14 billion years old, but it’s not polite on someone’s birthday to mention that they look so much older than their age.)

How does one commemorate the birthday of the universe? It’s too late to send a card … and yet the card is already there. Whoa.

I imagine that must have been quite startling to the people of Jericho. Or maybe they just didn’t notice. The people of Jericho could be really oblivious like that — such as 1,655 years later, according to Ussher’s figures, when they completely failed to notice that the entire world had been destroyed in Noah’s flood.

October 27, 2012 A vote for Mitt Romney is a vote to deny care to the sick
Recent Comments
33 Comments | Leave a Comment
"By the time kids are in college, they've already been thoroughly indoctrinated. It starts in ..."
P J Evans And the funny thing is it ..."
"The culture wars are all about maintaining power and privilege for a few people at ..."
Jenn H And the funny thing is it ..."
"Again, "It's obvious to me" doesn't mean it's obvious to everybody. And I guess that's ..."
Amaryllis Don’t give yourself away
"Today's neat thing is the teensiest cat on Earth.I'm baby!https://www.biolib.cz/IMG/G...I AM ANNOY.https://animalworld.com.ua/...A loaf of cat.https://be-tarask.wikipedia...EFF ..."
Jenny Islander And the funny thing is it ..."
Browse Our Archives
get the latest from
slacktivist
Sign up for our newsletter
POPULAR AT PATHEOS Progressive Christian
1