The religious right is frightened and angry after Tuesday’s election.

But this quasi-religious political movement is back on its heels now. After decades of lucrative success that transformed America’s politics and deformed American evangelicalism, the religious right was confronted Tuesday with evidence that its strategy is no longer working. The problem is not just that they lost in this election — that the president they demonized was convincingly re-elected, the legislative candidates they championed were resoundingly sent packing, and the ballot initiatives they rallied behind all went against them. 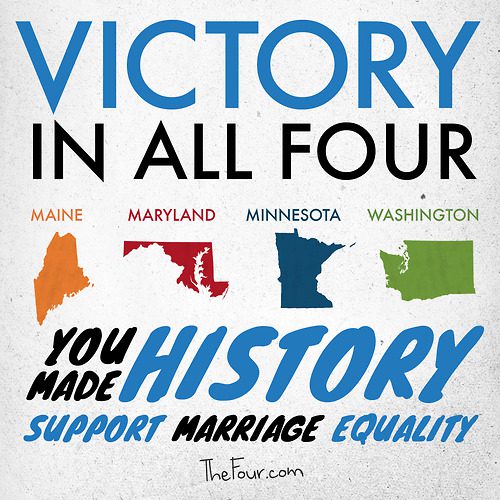 That happens with elections sometimes. Sometimes you win, sometimes you lose. That, by itself, doesn’t necessarily mean that something fundamental is no longer operative.

The problem for the religious right is not that they lost, but how they lost and why they lost.

The religious right lost because they are no longer perceived as having the moral high ground. For decades, the religious right has been pre-occupied with two issues above all else: abortion and homosexuality. And on both of those issues, they have wielded power and influence by claiming the moral high ground — claiming to represent the godly, “biblical” truth of right and wrong. Anyone who disagreed with them on these issues was portrayed as less moral, less godly, less good.

That claim — that framing of these issues as right vs. wrong, good vs. evil, biblical vs. unbiblical, moral vs. immoral — was asserted and accepted for most of the religious right’s 30-year run.

But not any more. That claim is still being asserted, but it is no longer being accepted.

Part of what happened on Tuesday was that millions of people rejected that claim on moral grounds. This was not just a political or pragmatic disagreement that preserved their essential claim of godly morality. It was a powerful counter-claim — the claim that the religious right is advocating immoral, unjust and cruelly unfair policies on both of its hallmark issues. Knee-jerk opposition to legal abortion and to gay rights weren’t just rejected as bad policy, but as bad morals — as being on the wrong side of right vs. wrong, good vs. evil, biblical vs. unbiblical, moral vs. immoral.

When Franklin Graham took out full-page newspaper ads declaring that “there are profound moral issues at stake” in this election, voters agreed with that much of his argument. Voters thought Graham was right that this argument about “the biblical definition of marriage between a man and a woman” is a “profound moral issue,” but they believed that Graham himself was profoundly wrong — that his opposition to marriage equality put him on the wrong side of a moral issue.

Voters in Maryland, Maine, Minnesota and Washington all rejected Graham’s opposition to marriage equality, not because it was too lofty a moral claim, or too sectarian in its “biblical” concerns, but because it was immoral, oppressive, unfair, unjust, unethical, unkind and unrighteous.

This makes for a new and fundamentally different argument. For decades, the religious right has been arguing that their purchase on the moral high ground ought to result in their political triumph. The political opposition to that used to be a form of “yes, but …” — yes, these political preachers are correct about morality and immorality, but other factors need to be considered, or other complications have to be accounted for, etc.

Opposition to the religious right’s agenda on Tuesday did not take the form of this “yes, but …” argument. It was simply, “No.”

It was not a disagreement about the political implications of the preachers’ righteous moral claims, but a denial of those claims, of their righteousness and of their morality. No, these political preachers are incorrect about morality and immorality. No, pretending that some “biblical definition of marriage” is a pretext for denying people their rights or delegitimizing their families is not good or decent or right. No, legal coercion compelling rape victims to bear the offspring of their attackers is not good or decent or right.

And that cuts to the core of the matter. That isn’t just a single defeat in a single election, but a fundamental rejection of the entire basis for why anyone, anywhere should ever listen to the religious right.

The religious right can no longer simply assert and assume that it has the moral high ground. If it wants to make that claim, it will have to argue for it, will have to explain why its absolute opposition to legal abortion and to civil rights for LGBT people is right or true or good.

I think of the religious right, broadly speaking, as divided between two groups: True believers and hucksters. They true believers have become unaccustomed to having to explain why they believe what they believe. The hucksters — disingenuous, bad-faith actors in it for the money, the power and the perks — have never been interested in or capable of explaining that.

But that explanation is now required. It will no longer suffice for the religious right simply to assert that everybody knows that marriage equality is immoral, because everybody does not know that. Many of us claim to know the opposite, in fact — we are saying that opposition to marriage equality is immoral. If the religious right wants to convince us otherwise, it will have to do just that — convince us, providing arguments, data, reason and reasons.

It won’t do for the religious right simply to continue wielding the word “biblical” like a club. President Obama quoted the Bible in declaring his support for marriage equality. Vikings punter Chris Kluwe cites the Bible more often and more specifically than any of his religious-right opponents bother to do.

The ground has shifted. The religious right has backed losing candidates before and has occasionally lost ballot initiatives too. But this loss wasn’t due to other issues — the economy, a war — eclipsing the significance of their “values” issues. This loss wasn’t due to any evasive “yes, but …” arguments from the other side.

The religious right wasn’t prepared for that response. You could see that throughout the election, as they continued to rely on attack-lines that had served them so well in the past. They repeatedly characterized President Obama as the “most pro-choice president of all time,” expecting him to cringe and deny the suggestion. Instead, he embraced it — running ads saying the same thing and insisting that it was true because defending women’s right to make their own choices is the right thing to do. They attacked Obama for his association with women like Sandra Fluke, as though they were somehow self-evidently immoral. Obama embraced them, figuratively and literally, insisting that doing so was the right thing to do. The religious right spent years accusing Obama of secretly favoring same-sex marriage and he responded by openly and forcefully supporting same-sex marriage, declaring that it was the right thing to do.

The religious right didn’t just lose an election or a ballot initiative, it lost an argument. It lost the argument because it wasn’t used to having to make an argument — wasn’t accustomed to encountering a forceful argument coming back at it from the other side.

The other side won the argument, and in so doing, it seized the moral high ground.

The full meaning of this still hasn’t sunk in for many of the leaders on the religious right. They can’t imagine that anyone may have begun to doubt the legitimacy of their long-presumed moral superiority.

“What is going on with the American people?” Pat Robertson asked, utterly perplexed.

“Race and ethnicity overrode values,” said Matt Staver of Liberty Counsel (still unable to see how his bigoted assumptions about the immorality of those people taint the reception of every other moral claim he makes).

The Liar Tony Perkins is in full “Turn those machines back on!” mode, unable to do anything more than just keep repeating the same failed assertions. The marriage equality votes in Maine, Maryland, Minnesota and Washington, he said, were “a significant moment for the radical Left, which was helped to victory by the most pro-gay president in American history.”

Perkins is still operating under the assumption that calling someone “pro-gay” implies a moral deficiency on that person’s part. Most people don’t agree. We’ve been having quite a national conversation on this subject for the past several decades and most of us have come around to regarding a title like “the most pro-gay President in American history” as a badge of honor — as high praise for this president’s morality, values, principles and commitment to justice.

Robertson, Staver and Perkins are all hucksters. What about the true believers? Southern Baptist Archbishop Al Mohler is someone I think of as a true believer on the religious right, and he’s one of the few figures in the movement who seems to realize that their presumption of moral superiority is no longer widely accepted.

As election returns came in Tuesday night, Mohler tweeted: “There is no evidence in voting patterns that President Obama’s evolution’ on same-sex marriage cost him anything. Another revealing truth.”

Mohler also referred to the marriage equality votes as a sign “we are witnessing a fundamental moral realignment of the country.” Unlike Perkins and Robertson, he seems to grasp what he’s seeing and hearing — that Americans aren’t just failing to embrace his denunciation of LGBT families as immoral, but Americans are actually denouncing him as immoral for opposing such families.

David Sessions finds a few other voices from the anti-gay, anti-abortion religious right who also seem to be “Smelling the Coffee.”

“We must face the reality that we may be on the losing side of the culture war,” Southern Baptist pollster Ed Stetzer writes.

This loss did not occur in Tuesday’s election — the election was simply a powerful demonstration that the loss is occurring. Much, much more to say about this, so we’ll return to this topic in future posts.