Training up children in the way they should go

Towleroad reports on a Boston Globe editorial debunking a popular anti-gay lie: The claim that public schools are “indoctrinating” children. 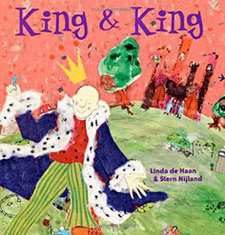 Voters should also know that Massachusetts is not, in fact, teaching children to read, write, and have same-sex marriages. In 2006, a teacher in Lexington did read second-graders a book about a prince who marries another prince. But it wasn’t a regular subject. … And the books had previously been made available for parents’ review. Not surprisingly, the scary ads omit these details.

The Lexington litigation was highly unusual, and the scores of other school districts in the state simply haven’t been convulsed with controversy about same-sex marriage. That’s not to say the issue never arises; children increasingly have peers whose parents are married to adults of the same sex, and they’re bound to ask questions. But it’s noteworthy that the one case of pro-gay indoctrination that marriage opponents regularly cite is more than half a decade old — and misleading to boot.

Misleading? There’s no way to be sure of that just yet. What we know is this: One teacher in Lexington, Mass., read children a story about a prince who marries another prince. But what about the long-term effects?

Mark Regnerus and Bradley Wilcox should conduct a longitudinal study of that second-grade class — now in eighth grade — to measure whether, as predicted by the scientists of the religious right, they do, indeed, all turn out to be gay because of this horrific misconduct.

I’m exaggerating, of course. The religious right isn’t really deathly afraid that these children will all turn gay because they once heard a nice story about a same-sex couple. The religious right is actually deathly afraid that having once heard such a story these children will grow up to be more tolerant of and kinder to same-sex couples.

And the prospect of such tolerance and kindness terrifies them.

These photos of smiling college students cheerfully recording their opposition to same-sex marriage and their support for Minnesota’s failed anti-equality ban makes me sad in two directions.

First there’s the top-level contempt for others being expressed there — the eagerness to see the law used to further marginalize the marginal, which is always just a generally mean thing to do.

But then there’s the harm being done to these kids, too. And yes, these are kids. They’ve been encouraged to do this, instructed to do this, and praised for doing this. But in not too many years, though — maybe 10 or 15, maybe less — they’ll regret it.

And then what? It may be part of a larger crisis of faith in which they turn their backs on everything they learned at their “Bible-based” alma mater — Jesus and the Bible along with the presumption of homophobia.

Or that crisis may force them to double down in order to preserve their identity and never have to regret being the smiling haters in these photos. That kind of white-knuckled clinging to the indefensible isn’t uncommon, but I’ve never met anyone it allowed to be happy.

(Oh, and note this is Northwestern College in Minnesota — a private evangelical school which is not at all the same thing as Northwestern University.)

November 10, 2012
Remember the Saturday to keep it productive
Next Post