More on that ‘controversial’ book that scares patriarchal Christians so much

Within the evangelical subculture, labeling someone as “controversial” used to be a way of marginalizing them. It was a warning sign that could be branded on any speaker, author, pastor or prophet deemed a threat to the status quo.

That used to work. Some Christian college would invite, say, Tony Campolo to speak in a chapel service — then they would retract the invitation once they were warned Campolo was “controversial.” Allow controversial speakers on campus, or allow their books to be sold in your bookstore, and you risk being branded as controversial yourself. 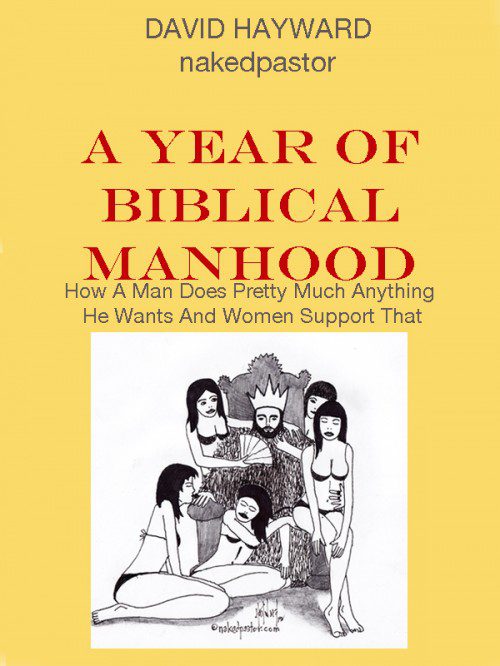 This was, for a long time, a widespread and effective tool for reinforcing the boundaries of the evangelical echo chamber and for convincing those controversial speakers and writers to tone things down.

I don’t think this works anymore. The Internet makes the epistemic bubble of the evangelical subculture unsustainable and, increasingly, the attempt to chasten and control prophetic voices by labeling them as controversial backfires.

The clearest illustration of this recently has been the coordinated effort by patriarchal and “complementarian” Christians to shout down Rachel Held Evans by ginning up “controversy” over her book A Year of Biblical Womanhood. All that controversy has helped to make Evans’ book a bestseller.

Even worse for the gatekeepers of the status quo, the Web also means that they can no longer control reviews of this dangerous book. Sure, patriarchal Christians have their own subcultural media, and they can still make sure that those magazines only print unflattering and contentious reviews. But for every such hatchet job in the official evangelical media, there are dozens of glowing recommendations and celebrations posted online.

Don’t let my meta-discussion of this collapse of the subcultural walls distract from the substance of Evans’ book or the quality of her delightful writing. Rachel Held Evans is a joy to read, quite apart from the role that has been thrust on her as one of the first prominent voices of post-subcultural evangelicalism. But that larger context — and the grace, wisdom and, yes, valor that she’s shown in that role — is pretty cool too.

Here are some more highlights of the large and ongoing conversation surrounding this book.

While some Christians will dismiss the book without reading it or hold a prejudice against Evans for her egalitarianism, there is a humble, invitational quality to the book for those willing to engage with its ideas.  In this way, A Year of Biblical Womanhood has a great deal to offer Christians from all points on the spectrum: To the complementarian willing to listen, Evans shares the joys of her egalitarian marriage, her appreciation for women of the Bible like Huldah the prophet and Junia the apostle, and her research and reflections on significant passages of Scripture.  To the egalitarian willing to listen, Evans is a model of honest searching and respectful conversation, encouraging us to not become embittered towards the complementarian majority in evangelicalism but rather to continue to maintain relationships and thoughtful engagement, fueled by faith, hope, and love.

When I just started to read A Year of Biblical Womanhood, I discovered that it had been described as putting the Bible “on trial “in the court of Rachel Held Evans, where she would be the “prosecution, judge, and jury” who would have the “final word on womanhood.”  I read and read and read, but I never got to that part.

The problem Evans addresses is how the Bible has been used poorly, falsely, harmfully, in certain Christian subcultures in marginalizing women. She makes her point by lampooning a literalist hermeneutic, a rhetorical move that many of her conservative critics have inexplicably missed. Evans is not mocking the Bible, but exposing the illegitimacy and randomness of a literalist reading of the Bible; the book is an exercise in biblical hermeneutics.

… Rather than a rant against the Bible, readers will quickly see that Evans has found some deep source of wisdom in this process, and the big lesson learned is applicable to everyone: Taking the Bible seriously does not mean “do what it says.” No one lives that way, even hardened literalists. Taking the Bible seriously means reading it with discernment and living it out responsibly, and no biblical injunction concerning women is immune. Tracing what the Bible says or implies about women brings to the surface this unavoidable hermeneutical process.

… Those who will be most upset with her — and already are — are those who read the Bible as a Christian cookbook for life, an owner’s manual designed to plot out for us a list of dos and don’ts. These critics mistake Evan’s lampooning of literalism with a lampooning of Scripture, Christianity, Jesus, and God.

Amidst the laugh-out-loud stories are moments that have literally changed the way I think about certain issues in my life. Yes, the book does address questions about gender roles and Rachel’s view on male-female complementarity, but the issues here are far bigger. A Year of Biblical Womanhood is ultimately about how we treat one another, how we see ourselves, and how we live out the gospel in our everyday lives.

Amanda MacInnis: “My One and Only Post on the Recent Hoopla Regarding #BiblicalWomanhood”

These things were never preached directly from the pulpit. But they were a part of the mentorship and discipleship of several churches that I have been a part of. And what’s worse, is that when these things are wrapped in biblical proof-texts and “words from the Lord” there is no opportunity to think through, question or evaluate the claims. They are Gospel. They are Biblical. To question these nuggets of wisdom is to question the Bible or worse, God himself. And we are not called to question but to faithfully obey. And so while the spokespeople, the pastors, bloggers and celebrities may say that “this is not what we teach” please take care to realize that there are lay leaders and lay ministries directly under your authority and using your resources that are in fact teaching the very things that Rachel Held Evans is addressing.

Rebecca Kirkpatrick: “Women of Valor: Finding each other”

Some have made a big deal over her literal reading of many parts of the Bible for the sake of understanding specific traditions: covering the head, not cutting the hair, submitting to one’s husband. The book is much more than that. It is 12 months of Rachel immersed in scripture, mind, body and spirit, with the goal of understanding how a woman lives within the complicated biblical tradition.

What I valued in this book was its capacity to create a new awareness in me that women who come from two very different places theologically can land in the same place, wrestling with the very same questions:

Mainline or Evangelical, women of faith are wrestling with these questions and are called to be in conversation together about them.

It is true that there are some very disturbing truths that Rachel has to name. In her chapter on beauty, she talks about how the erotic love poetry in the Song of Songs has been used by fundamentalist pastors to instill anxiety about body image into brides at their weddings: “It is your responsibility to delight your husband throughout all stages of life so that he has no reason to stray.” It’s a pretty astounding feat to turn the delightful Song of Songs into a source of oppression. Similarly, Rachel talks about the disturbing Quiverfull movement that the 19 kid Reality TV Duggar family is a part of, which promotes having gigantic families through a warped interpretation of a psalm as a Biblical prescription for family planning. As Rachel says, “Poems were never meant to be forced into commands” (112), which pretty well summarizes the way that so many parts of the Bible have been abused by those who need to turn the whole thing into an “owner’s manual.”

The theologically humble and self-aware Christian will be on the look out for where the biblical witness and cultural conformity are melded together and labelled “biblical”–and this, as I see it, is the central point Evans is making in her book. She is standing up to powerful ecclesiastical bullies, self-proclaimed gatekeepers who are quick to level the charge “unfaithful to the Bible” to those within earshot. She is showing them, with wit and insight, that their game collapses rather quickly. …

The core issue is that Evans’s conclusions undermine theological systems for which biblical inerrancy–which carries with it a strong tendency toward literalism, albeit on a spectrum–is the non-negotiable theological foundation.

“As a woman of faith, a single person, and a minister of the Gospel of Jesus Christ, church and ministry can be an incredibly hard place to be. I found this book to be tremendously freeing, encouraging, and convicting.”

“This book made me want to run to my Bible with a renewed sense of excitement to find the stories of women rarely mentioned in the Sunday-morning service. … It made me want to meet a bunch of friends at Starbucks and have a lengthy conversation about our roles in the church and life.”

“Rachel Held Evans tells the stories of women who overcame much in order to improve the lives of those around them. I want to do that.”

“As we laugh with her, as we are challenged (Evans is also challenged and actually holds on to some important lessons, rituals, and new skills when the year is over), and as we are convicted by how often we have judged.”

“Valor can be expressed through many callings, and men like myself should be honoring whatever ways our sisters are valorous instead of trying to pigeon-hole them into specific roles.”

“The experiment is, admittedly, snarky at times, but I didn’t find it to be mocking — certainly not of God’s word — and this distinction is important to keep in mind when reading.”

“At the end of the day, no matter how ‘just biblical’ many patriarchal congregations are trying to be, they’re still picking and choosing. They’re blowing one New Testament command off as ‘cultural’ but enforcing others that are just as much so.”

November 14, 2012
Chick-fil-A Biblical Family of the Day
Next Post

November 14, 2012 Religious right splits: Hucksters say double down; true believers want to try something new
Recent Comments
27 Comments | Leave a Comment
"what is the tittle of this pic?(☆_☆)"
TerrorTrike 12/1 Flashback: Cizik culture
"This is reminding me of the guy from usenet who insisted that fiction was an ..."
Ross 11/30 Flashback: Victims
"I wish I could find the article where they confronted an irish bishop about the ..."
Ross 12/1 Flashback: Cizik culture
"especially if they have spooky powers and/or live in a paintinghttps://media.tenor.com/aXc..."
SmogMonster 12/2 Flashback: Ideomotor
Browse Our Archives
Related posts from slacktivist