‘Jesus jokes’ are nothing new

Edward J. Blum and Paul Harvey have a CNN column up about what they perceive as an increase in jokes about Jesus.

I’m looking forward to reading Blum & Harvey’s new book, The Color of Christ: The Son of God and the Saga of Race in America. But I have a hard time accepting what they’re arguing here:

[Jesus jokes] represent a comedic trend that has animated the United States since the 1970s. More and more comedy gimmicks hit on Jesus, his ethnicity and his relationship to politics. … The first public jokes about Jesus were heard in the 1970s. There had been religious jokes before this, but none about Jesus had become widely popular because organized Christianity held such authority.

I’m not old enough to remember comedy before the 1970s, but I find it hard to believe that a figure so prominent and essential in our culture was untouched by comedy for hundreds of years until then. That’s not how comedy works.

My sense is that jokes about Jesus were probably already well-established by the time the Alexamenos graffito was scratched into a Roman wall.

I know Lenny Bruce was telling Jesus jokes in the 1960s, but I’m looking for other specific examples and specific jokes. 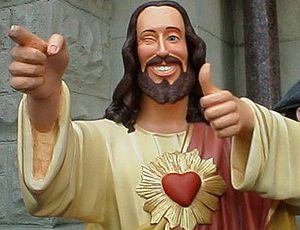 This isn’t a Jesus joke in that sense, but it’s evidence of a joke from Jesus — or at least a bit of punning word-play.

Steve Caruso (via) unpacks a pun from the Gospels.

“All who take the sword will perish by the sword,” is an elegant phrase in English or in Greek. But in Aramaic, Caruso says, the word there means either “sword” or “end.” Thus in Caruso’s “plain retro-translation back into Galilean Aramaic,” Jesus is saying, “For everyone who took up a sword, by a sword (OR ‘in the end’) they shall die.”

Caruso pursues the implications for pinning down the source and dating of this saying of Jesus. What I’m most intrigued by is what it reveals of Jesus’ character. Gethsemane, then betrayal and arrest. And then a touch of mordant whimsy.

And finally, here’s a story from Stuff Fundies Like about turning Jesus into a joke.

The video there is a lesson in How Not To Do Evangelism.

I remember doing this sort of thing in church youth group. I remember feeling reluctant about it, and then feeling guilty about feeling reluctant about it because we were taught that any such reluctance was due to a lack of love for God. I wasn’t yet able to articulate to myself that, no, it was actually due to a holy and proper aversion to the lack of love we were displaying toward other people.

This kind of tract-bombing evangelism is so widespread, and so many millions of gospel tracts have been printed and distributed like this, that I suppose it’s possible that someone, somewhere, once became a Christian as a result.

But I’ve never heard of such a person. Ever. Not one.

That utter lack of results suggests that this exercise isn’t really about trying to find an effective way to communicate or to build relationships. It’s about exempting ourselves from complicity. “Hey, don’t blame me … I slapped a gospel tract on that guy’s windshield. Ball’s in his court now. If he goes to Hell it’s his own damn fault.”

Stunts like this “Tract Smack Down” claim to be examples of good Christians accepting their responsibility to spread the gospel. In reality, though, they function more as a defiant assertion of irresponsibility.

November 15, 2012
Chick-fil-A Biblical Family of the Day
Next Post