So, yeah, this has turned out to be a bigger project than I anticipated, but having gotten started it’s hard to stop.

It has also been a rewarding project. I’ve come across hundreds of terrific blogs and tons of brilliant, funny, moving, engaging, inspiring and informative writing.

There are also a few clunkers in that list, mind you. I hadn’t realized that anti-feminist women’s blogs were a thing, and some of those are pretty depressing, both in the execution and in the very idea of them. 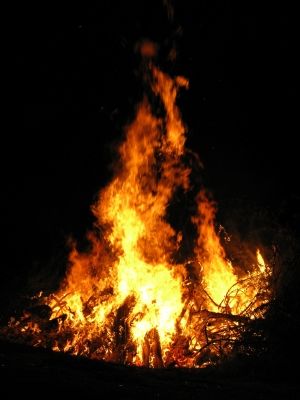 Plus one of the things that irks me about a lot of the lists of “Christian bloggers” that I’ve seen is the way they enforce strict limits — implicit or explicit — on what does and does not constitute acceptable content, or what may or may not be written. Most of the blogs on this Bonfire list are excluded from the popular evangelical blog listings — and from the conversation in the evangelical sub-blogosphere — for one such reason or another. Maybe they’re not explicitly excluded because they’re women, but there seems to be a high correlation between the sorts of things women write and the sorts of ideas that the boys running that show find unacceptable.

I’ve seen the delusional epistemic closure that approach produces and I don’t want to fall into that trap, so I didn’t exclude any blogs from the list, even those few that seemed to be pathologically codependent “complementarian” sites paradoxically insisting that Christian women must keep silent.

But that’s only a tiny handful of the more than 1,000 blogs I’ve encountered in making this list, most of which are really good.

There are smart women writing smart things all over the U.S. and Canada, throughout the U.K., in Australia and New Zealand. There’s a blog from Vanuatu in that list. And there are bloggers sprinkled throughout Europe, Asia and Africa. (There’d be many more of those, of course, except that this English-language list was compiled by a parochial monoglot. My parochialism also accounts for this list being overwhelmingly white, a deficiency I’m working on addressing.)

I’ve resisted any impulse to rank these by popularity or preference. It would likely be useful to sort the list into categories, but I haven’t tried that either for fear of pigeonholing folks as “only” this or that category. Feel free to try ranking or sorting the raw material of this (still growing) alphabetical list. It might be a good starting point for someone looking to compile a list of the 100 Biggest Christian women’s blogs or of the Top 100 Blogs by Women Pastors or whatever.

(The list is alphabetical by first name, because this is the Internet and iTunes seems to have changed the rules. And it’s a bit of an uneven mix of names and blog titles, so if you’re looking for your own blog and can’t find it, try command-F, but if it’s not there, it should be, so please leave a comment correcting that omission.)

Rather than continuing to post periodic updates in full, as in the previous post, I’m hoping to incorporate this list — and the other two I’m working on — into the permanent architecture of this site. That way they’re easier to find, and I can keep updating them without more separate link-laden posts.

But I don’t want that to seem in any way proprietary. This isn’t my list, it’s just a list — and if anyone wants to copy and paste the whole thing elsewhere, that would be terrific too.

Finally, I probably don’t need to say this, but let me also clarify that in making this list — a list of only Christian women bloggers — I’m not in any way suggesting that Christian blogs are the bestest blogs and the only ones anyone should be reading. If you restrict their blog-reading habits in that way, you’re cheating yourself big time. So the purpose of this list is not to cheer for Team Christian or to elevate one tribe over anyone else, it’s more intramural than that.

Again, I started this partly out of frustration and annoyance at the question “Where are all the Christian women bloggers?” That question seemed disingenuous — the faux lamentation of boys who have themselves spent years and careers excluding and discounting the very same voices that they’re pretending to be unable to find. So this project is, in part, an attempt to shut up a bunch of annoying jackwagons, and since they’re specifically Christian jackwagons, this list also had to be specifically Christian.

Or, to focus on the positive, it was a way to try to help amplify the voices of women within the church and within the Christian conversation. Because these women deserve to be heard. And because the church, for too long, has been limiting itself and its ability to function by refusing to let everyone speak.

December 11, 2012 As deep as any ocean ...
Recent Comments
22 Comments | Leave a Comment
Browse Our Archives
get the latest from
slacktivist
Sign up for our newsletter
POPULAR AT PATHEOS Progressive Christian
1

Climate Denial Is Not Loving Your Neighbor
A scribe once asked Jesus, "Which commandment is the first of all?"...
view all Progressive Christian blogs
What Are Your Thoughts?leave a comment
Copyright 2008-2020, Patheos. All rights reserved.