Adams, also a former chair of the Texas GOP, believes that climate change is part of the Antichrist’s plot to create one world government.

But even though Adams is a devout disciple of Tim LaHaye’s Bircher eschatology, she doesn’t quite seem to understand it. In a 1999 newsletter, Adams wrote:

The Bible tells us that in the end times there will be a world government headed by a world leader, called the anti-Christ, who will profess a world religion, but did you ever think you would live in the day when these things would come into being? That is exactly what the United Nations is doing behind the backs of most Americans.

That’s all boilerplate “Bible prophecy” lingo, except for that weird rhetorical question — “did you ever think you would live in the day when these things would come into being?” 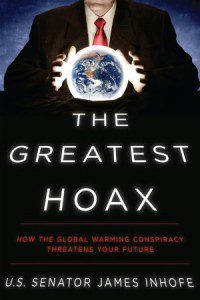 That’s the whole point of this “Bible prophecy” nonsense, to believe that this generation uniquely lives in the day when these things are coming into being. There has never been a single “prophecy” preacher or Rapture enthusiast who taught that this was a prophecy for some distant future generation.

These folks insist that the Rapture and the End of the World are prophesied to occur in our lifetime. That’s what makes us special. It means that the Bible was written mainly for and about us — for and about the 21st-century white Americans in whose special lifetimes these prophecies were ordained by God to occur. John of Patmos wasn’t really writing to the seven first-century churches he names in the book of Revelation — he was writing to us, and really only to us.

Even more special than that, actually, because as students of the secrets of Bible prophecy, we alone are the enlightened ones who possess the Gnostic truths of the initiates.

That’s the appeal of the whole bizarre realm of LaHaye-style “Bible prophecy.” And that’s why more than a third of Americans find it appealing, as a Public Religion Research Institute poll released yesterday shows:

More than a third of Americans believe the severity of recent natural disasters is evidence that we are in the “end times” described in the New Testament — a period of turmoil preceding Jesus’ Second Coming and the end of the world.

“There is a significant proportion of Americans who see these phenomena through a theological lens,” said Daniel Cox, research director at the Public Religion Research Institute, which released a poll on religion and climate change on Thursday (Dec. 13) in partnership with Religion News Service.

“It’s hardly a fringe belief. It’s nearly four in 10 Americans who are embracing this,” Cox said.

The conviction is particularly strong among white evangelical Protestants (65 percent).

This view helps to explain white evangelical support for Inhofe’s climate denialism and for his party’s climate do-nothing-ism. These folks believe that God is bringing about the end of the world, and that efforts to address the disasters coming from climate change are part of the Antichrist’s Satanic plot.

But don’t worry, that’s just a “fringe” belief. Only 65 percent of white evangelicals think this way.

Her son Roger is now a prominent spokesman for the group. Here (via Brian Tashman) is Roger Schlafly writing about the recent election at the Eagle Forum Blog:

America was founded by WASPs — White Anglo-Saxon Protestants. They had nuclear families, attended church, and believed in the Protestant work ethic. Republicans are seen as believing in traditional American values.

Democrats campaign largely by badmouthing traditional American values, and convincing various demographic groups that they are outside the Republican base, and hence better off voting Democrat. So non-whites, non-Christians, and non-marrieds vote Democrat out of group identifications. That is, they see it as being in their group interests to tear down traditional American culture.

Democrats never persuade voters based on reason or logic. They gain voters by increasing government dependence and by promoting changes to immigration policy. …

But please, please don’t accuse him of being a bigot. And please don’t infer from those words that the righteous, godly white evangelicals of the Eagle Forum are any sort of racists.

After all, Schlafly is not saying that he hates “non-whites” and “non-Christians.” He’s just saying that they’re inferior, dependent parasites who are destroying white America.

December 14, 2012 SSDD: If the evangelical mainstream wants me to view the religious right as marginal, then they should do more to marginalize the religious right
Recent Comments
65 Comments | Leave a Comment
Browse Our Archives
Related posts from slacktivist