Actor Chad Michael Murray is joining the Left Behind movie reboot in the role of Buck Williams.

This is potentially exciting news as it rules out that part for Nic Cage — making it likelier that my Cage-as-Nicolae-Carpathia wish will come true. (Murray and Cage are still the only cast-members listed on the movie’s IMDB page.)

Set to kick off filming in Baton Rouge next spring, Armstrong is planning to make more of a disaster movie than the adventure-based examples that came before, working this time from a script by John Patus.

Patus previously scripted the Kirk Cameron versions of Tribulation Force and Left Behind: The World at War, as well as the perplexing direct-to-video Deceived, in which Judd Nelson seemed as baffled by the religious implications of the plot as I was watching him.

There might be a entertaining story to be told based on that movie’s formula of Contact + Hal Lindsey + The Thing, but Deceived isn’t it. 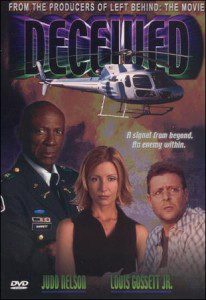 Chad Michael Murray appeared on One Tree Hill, which I’m startled to realize ran for nine seasons on the CW. He also “got his big break on WB shows such as Gilmore Girls and Dawson’s Creek.”

(Now I’m imagining a Gilmore Girls episode in which the Rapture happens in Stars Hollow. It’d be just like every other episode of the show, except Mrs. Kim doesn’t show up for the town meeting.)

Before his big break on Gilmore, Murray had a part in another End-Times religious production: Megiddo: The Omega Code 2. I’ve seen parts of the original Omega Code, but sadly Michael York wasn’t as campy as I’d hoped he’d be as the Antichrist.

The synopsis of Megiddo: The Omega Code 2 is not promising:

At its emotional core, Megiddo is the Caine and Abel story of the two men enamored with the same woman, raised as brothers, who grew up to find themselves pitted against each other over the fate and souls of the entire world.

That single sentence manages to get at least five things wrong with the reference to Cain and Abel (while also making me wonder what “Am I my brother’s keeper?” would sound like in a cockney accent).

But the entire film is on YouTube, and I’m slightly tempted.

January 1, 2013
Knocking on the White House door 150 years ago for a fireside chat on the eve of emancipation
Next Post