Do we have a superstitious belief in widespread superstition? January 3, 2013 Fred Clark

“Is 2013 an Unlucky Year?” Hemant Mehta asks — quickly and correctly answering “No.”

He points us to this Philadelphia Inquirer article: “Those who dread number 13 face a troubling year.”

But it seems the Inky’s Michael Matza couldn’t find any such troubled and dread-filled triskaidekaphobes. Everyone he cites is someone who argues against the irrational fear of the number 13.

If this is such a big deal for so many people, shouldn’t such people be easy to find? When Matza reports that:

An estimated 17 million to 21 million people in the United States experience fear of the ill-fated integer, with symptoms ranging from mild anxiety to full-blown panic attacks, Donald Dossey, founder of the Stress Management Center and Phobia Institute in Asheville, N.C., said in a 2004 interview. …

I call shenanigans. First due to the hopeless muddle of the infinite range there — “from mild anxiety to full-blown panic attacks.” So we could be talking about 20.9 million people on the “mild anxiety” end of that range — people whose main discernible “symptom” is saying something like, “Nah, not that one — gimme Jeter. No. 2, duh,” when the bar softball team jerseys are being distributed. And I’m doubtful of the claim that those at the other end of the range are really suffering panic attacks due to the number 13 and not to some other source of trauma or illness.

But mainly I call shenanigans because the source of this statistic is “founder of the Stress Management Center.” So you can pay him to lift the bad juju of your superstitious fears. Hmm.

Anyway, here’s the bit that really intrigued me in this article:

The idea of 13 as an “unlucky number” is a widely known bit of folklore. But does widespread awareness of such folklore really translate into this “dread so common” that Matza’s article asserts and assumes without ever supporting that claim with data or first-hand account? 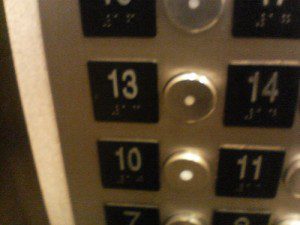 If it turns out that, in fact, that tens of millions of your potential customers do have a superstitious dread of the number 13, then renumbering the floors or the units of your business would be a rational business decision. If Mr. Dossey’s dubious figures are correct, then something like 7 percent of the populace has some degree of discomfort with that number, and you might marginally improve your potential business by accounting for that discomfort. Their fear may be baseless and irrational, but it could have a tangible, measurable effect on your business.

But it might also be that this widespread dread of the number 13 is, itself, a baseless and irrational belief. Without far more evidence than Matza’s article provides, it may be that renumbering the floors or units in your business would itself be a form of superstition — an irrational fear of dread-filled potential customers who may not actually exist.

Unless, of course, you’ve done something to earn an abiding dread of Friday the 13th. In that case, there’s nothing irrational about fearing that date and the haunting visitation it may bring.

But there’s still time — we won’t see another Friday the 13th until September, so you’ve still got nine months to repent and to work for justice.

January 3, 2013
Chick-fil-A Biblical Family of the Day
Next Post