Notes from the culture wars

“I guarantee you, if you see your table praying before the meal, you can mentally subtract a third from your tip.”

“Non-sexual self-bondage is not a recognized mental health diagnosis at this time.” 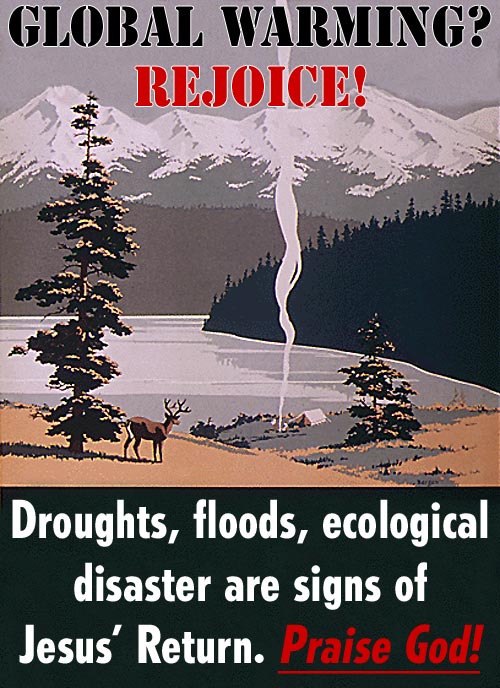 “When war, global devastation, and environmental ruin become things to celebrate as the ‘fulfillment of prophecy,’ then not only do we ignore clear Biblical mandates to be peace makers and stewards of the earth, we who should be working to bring the kingdom of God to earth, instead, become villainous co-conspirators in the reign of evil and death.”

“While he was alive, the right wing savaged King as a communist who hated America and a dangerous subversive. Now they’re claiming he was just like them. Not coincidentally, they’ve done the same thing with the Bible.”

“When the attorney general of the state of NJ decided that we had to put up a same-sex site, and we did it, we literally had to hire guards to protect our lives because the people who were so hurt and angry with us were Christian people who feel that it’s a violation to Scripture.”

“Alfie’s Home, cited in PFOX’s Supreme Court brief, is the most horrifically disturbing children’s book we have ever seen.”

“We searched the Internet for any examples in which a religious group had been forced to host a same-sex ceremony against its beliefs. We couldn’t find any.”

“The story serves as an illustrative example of the way the conservative echo chamber can twist facts and turn baseless speculation into their controversy du jour.”

“While the ‘liberal media’ is often framed by conservatives as activist and acting on an agenda, it seems that the deeper criticism contained within that charge is the simple fact that, after hearing The Word of their side of the story, the media refuses to become an activist force for their cause.”

“When he lists all these denominations and atheists and Buddhists and Muslims it’s like we’re all equal, of equal proportion, and we are not.”

“They never think about what the Jewish kid feels like, or the atheist, or, Powers forfend, the Wiccan.”

“Best wishes for your good health, and the speedy demise of the sham institution that employs you.”

“I still think that Ken Ham is genuinely out to make Christians look as foolish and dishonest as possible because he hates Christianity.”

“Perhaps we shouldn’t be surprised that the bishops are still complaining about contraception — but the administration should stop listening. Catholics already have.”

“Frankly, the culture wars are kind of over and Republicans largely lost.”

“That’s why, from the outset, many of us have resisted the rhetoric of embattled religious freedom. — If you want to take the Queen’s shilling, you must play by the Queen’s rules.”

“What has always been the worst about Douthat is that his conclusions, supported by whatever he can scrape together, have rarely been true.”

“No evidence exists that those quotations are authentic. Yet they are presented to students in Texas public schools as real and historical proof supporting an ideological point of view.”