Here’s the Second Coming of Jesus Christ, as envisioned by Tim LaHaye and Jerry Jenkins in The Glorious Appearing [note: this is R-rated graphic violence]: 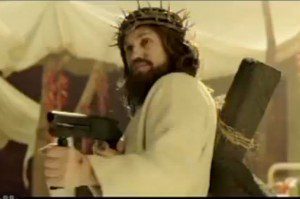 Rayford watched through the binocs as men and women soldiers and horses seemed to explode where they stood. It was as if the very words of the Lord had superheated their blood, causing it to burst through their veins and skin.

… Tens of thousands grabbed their heads or their chests, fell to their knees, and writhed as they were invisibly sliced asunder. Their innards and entrails gushed to the desert floor, and as those around them turned to run, they too were slain, their blood pooling and rising in the unforgiving brightness of the glory of Christ.

… Their flesh dissolved, their eyes melted, and their tongues disintegrated.

… And Jesus had killed them all.

Jesus Christ, killer. Mass-murderer. Spiller of blood and entrails. He crushes his enemies, sees them driven before him, and revels in the lamentation of their women. (That quote is from the Bible, right?)

This is received not as the most pernicious blasphemy imaginable, but as wholesome, biblical, family-friendly entertainment for good evangelical Christians. It’s seen as edifying. It’s part of a beloved and phenomenally popular series of books, published by a respectable evangelical Christian publishing house and sold in every Christian bookstore chain in the U.S.

But the following video, on the other hand, has been denounced as an outrageous sacrilege — not by Tarantino fans, but by American Christians. Quite a few American Christians who have no problem at all accepting, enjoying and celebrating Tim LaHaye’s gory Jesus in the Left Behind series nonetheless pretend to be horrified by Saturday Night Live’s spoof “DJesus Uncrossed”:

Is this possible? Is this at all believable? Can anyone credibly claim to find that video offensive, but not be even more offended by that scene from The Glorious Appearing?

I don’t think that is believable at all. It seems like indignation-addicts just seizing on one more excuse for getting high on offendedness.

It’s understandable if someone thinks the SNL skit goes too far — that’s what it’s trying to do. But the premise of the sketch is far more reverent than the premise of Tim LaHaye’s scene of mass-slaughter.

LaHaye revels in gushing entrails and melting eyeballs, his blood-smeared face breaking out into a pious grin as he cheers. “This,” he says, “this is what Jesus Christ is really like! This is the real, true Jesus!”

The SNL skit, by contrast, presents itself as offering the most over-the-top, ludicrous idea it could conceive. “Nothing,” it says, “nothing could be more absurd than to imagine Jesus like this.”

James McGrath has a thoughtful response to SNL’s skit, drawing on this quote from Brian McLaren’s book Everything Must Change:

This eschatological understanding of a violent Second Coming leads us to believe that in the end, even God finds it impossible to fix the world apart from violence and coercion.

… If we remain charmed by this kind of eschatology, we will be forced to see the nonviolence of the Jesus of the Gospels as a kind of strategic fake-out, like a feigned retreat in war, to be followed up by a crushing blow of so-called redemptive violence in the end. The gentle Jesus of the First Coming becomes a kind of trick Jesus, a fake-me-out Messiah, to be replaced by the true jihadist Jesus of a violent Second Coming. This is why I believe that many of our current eschatologies, intoxicated by dubious interpretations of John’s Apocalypse, are not only ignorant and wrong, but dangerous and immoral.

February 20, 2013
The 'biblical worldview' doesn't come from the Bible
Next Post

February 21, 2013 6 years ago: Let us reason together
Recent Comments
211 Comments | Leave a Comment
Browse Our Archives
Related posts from slacktivist

Going down, down, down, and coming up again
"A man who lies habitually becomes a lie, and it is increasingly...
view all Progressive Christian blogs
What Are Your Thoughts?leave a comment
Copyright 2008-2021, Patheos. All rights reserved.
Close Ad