What does this chart tell us about Christian sexual ethics?

There are several possible ways to interpret this chart: 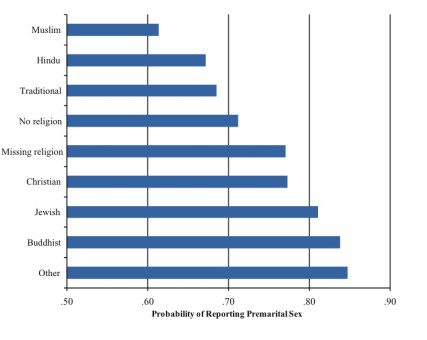 We could view this as:

A. Evidence of Christian hypocrisy.

B. Evidence of Christian honesty.

C. Evidence that the lack of a coherent sexual ethic leaves many Christians adrift.

D. A compelling reason to convert to Buddhism.

E. All of the above.

I found this via Andrew Sullivan, who titled his post: “Which Religions Are the Most Chaste?” That’s not quite what the study found, though.

Kevin Hartnett of the Boston Globe wrote about the research by Amy Adamczyk and Brittany Hayes of the City University of New York. Their chart above comes from survey data of 418,000 people around the world, but note that this chart does not show the probability of premarital sex, but rather the “Probability of Reporting Premarital Sex.”

Sex is a notoriously difficult subject to study. There are all sorts of reasons people dissemble about what they do, and you can imagine those incentives are even stronger when you’re a woman in a conservative Muslim household being asked whether you had sex before marrying your husband. Aware of these challenges, the researchers ran several statistical tests to assess respondents’ truthfulness. They found that Muslims and Hindus were actually the least likely of all religious groups to fib about premarital sex. This could suggest that Muslims and Hindus have fewer transgressions to lie about; or it could mean that Muslims and Hindus are better dissemblers given the heightened consequences around premarital sex in those cultures.

Whatever else that chart means, though, I think it supports the argument that “The problem with evangelical sexual ethics is that we haven’t got any.”

February 28, 2013 5 years ago: The barrel of a gun
Recent Comments
52 Comments | Leave a Comment
"https://uploads.disquscdn.c..."
Matri Cash Wednesday
"Your insistence bagels belief."
Matri Cash Wednesday
"I upvoted your comment, but thinking about it, it is a (very) little uncharitable. It's ..."
Iain Lovejoy Cash Wednesday
"what do they expect, indeed"
Amaryllis It outlives me when I’m gone
Browse Our Archives
Follow Us!

Freedom is Slavery, Ignorance is Strength
So there's this communist dictatorship. The head of state is elected for...
view all Progressive Christian blogs
What Are Your Thoughts?leave a comment
Copyright 2008-2020, Patheos. All rights reserved.