• Joe Hanson posted this video of what he calls the “world’s cutest frog” a while back and I’ve watched it a dozen times since.

I can also confirm, based on a sample of a single Yorkie-poo, that this is true: “Video of tiny, squeaking frog drives dogs crazy.”

This frog sounds like a squeaky dog toy. Willow doesn’t like dog toys that squeak, but she goes nuts over this frog.

• In a desperate bid to save endangered rhinoceros, conservationists are borrowing an idea from Bunny Colvin, calling for a legal trade in rhino horns. 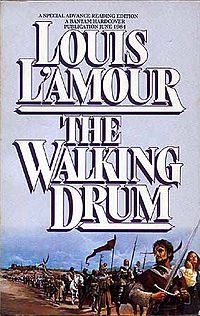 • David Barton has admitted that his “historical” story supporting his call for guns in schools actually comes from the old Louis L’Amour novel Bendigo Shafter. This is unacceptable. If we’re going to start treating Louis L’Amour novels as actual history, then we need to start with The Walking Drum — his epic historical novel set in 12th-century Europe. (L’Amour’s protagonist, Kerbouchard, is a bit of a Mary Sue fantasy, but the author did his homework and jams the book full of fascinating detail.)

• Benedict XVI: The Al Mohler of the Catholic Church.

• I am 6’2″. I am therefore grateful to Dan Kois for saying what needs to be said.

• Lima, Peru, is a big city and it’s in the desert, so the lack of drinking water is a big problem. “So the University of Engineering and Technology has rigged up a billboard to suck drinking water out of thin air.”

• Scientists say the creature recently caught in the Raritan River in New Jersey is not a “sea monster” but a lamprey. That’s partially correct. It is a lamprey. But a lamprey is a sea monster.

• The Onion: “Gay Teen Worried He Might Be Christian”

At first glance, high school senior Lucas Faber, 18, seems like any ordinary gay teen. He’s a member of his school’s swing choir, enjoys shopping at the mall, and has sex with other males his age. But lately, a growing worry has begun to plague this young gay man. A gnawing feeling that, deep down, he may be a fundamentalist, right-wing Christian.

In her exemption request to school officials, [Dina] Check described herself as a Bible-reading, church-going Catholic who believes “€œlife is a gift from God and the body is a marvelous work of divine creation to be reverenced as a temple of God.”

• Here is your February 2013 Biblical Studies Blog Carnival. And here is your March 2013 Carnival of Evolution. I’m a curious layperson, not an academic, so they’re both a bit over my head at times, but I enjoy both of these fascinating monthly roundups. If you like stories about unearthing very old things that help us learn about the past, you’ll like both of these too.

• It’s hard to say anything new about how despicable and predatory “prosperity gospel” preachers tend to be, and perhaps Sarah Posner doesn’t say anything remarkably original here:

How many people believed Steve Munsey, and believed that giving him money — for his family’s salaries, the car, the jet, the other excesses — would “bless” them? How many dollars did he collect by telling people that God would bless them for giving him money, that their own poverty was caused by a lack of faith and a lack of giving to him, and that God would not be merciful to them unless they demonstrated their faithfulness by giving their money to him?

But whether or not those questions are new, they’re certainly good ones.

• “First of all, nothing can be done to your body without your permission. So, it’d be a violation of the constitutional right to privacy if that were to happen.”

That’s Sen. Charles Grassley, R-Iowa, reassuring a constituent that preschoolers aren’t going to be injected with a Mark-of-the-Beast microchip, while also accidentally reaffirming that Roe v. Wade is constitutional, necessary and just.

March 3, 2013 Tim LaHaye pans script for 'Left Behind' reboot
Recent Comments
46 Comments | Leave a Comment
"I always thought "summer of sixty-nine" would sound good as a stripped down and slowed ..."
Cobalt Blue Feeling unknown and you’re all alone
"Canadian pro-coronavirus politician Maxime Bernier responds to journalists asking basic question by doxxing them to ..."
Skybison A night with Lot in Sodom, ..."
"Oh dear oh dear oh dear.I suddenly remembered a book, High Weirdness By Mail by ..."
Jenny Islander A night with Lot in Sodom, ..."
"Whichever. It just strikes me as the height of stupidity/insanity that any other state would ..."
reynard61 A night with Lot in Sodom: ..."
Browse Our Archives
get the latest updates from
slacktivist
and the Patheos
Progressive Christian
Channel
POPULAR AT PATHEOS Progressive Christian
1