‘Luckily, this is not difficult’

“Whatever women do they must do twice as well as men to be thought half as good. Luckily, this is not difficult.”

“In computing the score, check the various items under DEMERITS which fit the wife, and add the total.”

“Living with a small vision of God’s calling on your life has serious consequences. God’s mission in the world suffers setbacks when women settle for letting others take care of things or believe they’re out of line if they step up and lead.”

“I’m definitely confused, which is commonly the case when I read stuff asserting that there is only one way for women to be, and one way for men, and God forbid we take on roles that reflect our gifts and interests.” 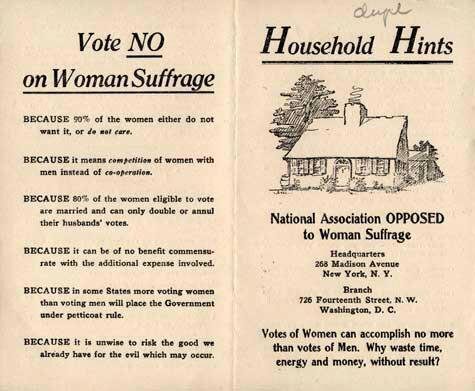 “We need the diverse gifts and talents of both men and women working together to bring ‘kingdom come’ into our cities, neighborhoods and households.”

“We need to get rid of the vicious slander that a young man wanting to follow in the footsteps of a great woman isn’t right in the head.”

“The way many in today’s church talk about sex, men and women, modesty, and marriage does a tremendous disservice to men, women, marriage, and sex.”

“Sexism flourishes because people don’t stand up to it, and … standing up to it more could very well be the solution.”

“When we blame women for the reactions of men — whether it is to their art, to their clothing, to their ‘unladylike’ behavior like riding public transit after dark — we reinforce rape culture.”

“The images of the fight itself are arresting and disturbing, but Lewkowicz does more than bear witness to domestic violence. She also chronicled the entire process of domestic violence and how an abuser sets up the opportunity to beat his partner.” (Trigger warning for both the photo-essay and the analysis.)

“If my family’s stories are not worthy of the same protections afforded to all of our fellow citizens, what stories are?” (Note: Vivid testimony of domestic violence)

“Before I knew it, my fiancé picked me up off the sofa, threw me against the wall, and ran outside of my apartment. [laughter]”

“Like Bathsheba, women are expected to ‘choose another option’ — another route to work, another outfit, or another shade of lipstick.”

“There’s a lot of country music and gospel people who won’t accept them for who they are.”

“It’s not easy being a gay, atheist teen in the evangelical church and a conservative Christian school.”

“As a pastor, a community leader and a woman, I stand by health centers like Planned Parenthood, where, on many occasions, I and those close to me have received excellent care.”

“This is why lobbyists should not be writing medical policy.”