I wonder if this perhaps applies to other terms as well.

• In a similar vein to that dismaying anti-gay “rap” video we discussed earlier this week, NTodd relays a report that the Gaede twins — once better known as the white supremacist pop duo Prussian Blue — have renounced the racism they used to sing about. The girls blame their mother for indoctrinating them into the “home-schooled country bumpkins” who recorded that hate-filled music.

• And Jamie the Very Worst Missionary has a good addition to our discussion of Stupid Things Adults Say to Children:

I can distinctly remember being called out by a teacher for giving a Ritz cracker to a friend. She said, loudly, “Jamie, will you be giving everyone a cracker?”

I believe I looked up at her with all the innocence of a 7-year-old, and thought, “This teacher is so effing stupid. I’m holding three crackers in a sandwich bag. How could I possibly have enough for everyone?”

And then she made my friend give the cracker back! Because the world is CrazyTown.

• Headline: “Lausanne Puts Away Evangelical Christian.” I read that and for a moment I thought church discipline was getting out of hand, but then I realized it was just a high school basketball game. 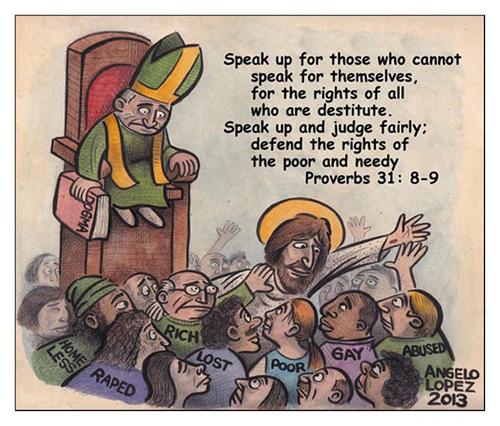 • Two reactions to this post from Alvin McEwen. 1. I think he makes a good point about the sensibilities here. 2. I would also love to visit Rickie Dillard’s church.

• The sensus fidelium is screaming as loud as it can. But it seems no one in a funny hat is listening.

• The New Hampshire state legislature is still too big.

• “Will The GOP Broaden Its Appeal? A 30-Year History” There is nothing new under the sun.

• The Consumerist reposts a classic primer on a key strategic tool for consumers: “How to Launch an Executive Email Carpet Bomb.”

• I would just like to say that Malaysia is awesome and that the president and/or prime minister is the kindest, bravest, warmest, most wonderful human being I’ve ever known in my life.

What’s that? It’s too late to get in on the Malaysian payola gravy train that those write-for-hire right-wing bloggers got rich on?

• Mark Evanier posts a video of the odd magician Tom Mullica. Mullica, as Evanier says, “did bizarre things with cigarettes. I don’t think anyone’s doing this kind of thing today and with good reason.”

True. As Mullica himself says of his act, “It’s not how, but why?”

I’ve got an old instructional video of Mullica’s around here somewhere that I bought back in the day when I got cast as the devil in Damn Yankees. He was a big help in coping with a script that included such otherwise-unexplained stage directions as “pulls a lit cigarette from thin air.” No asterisk, no notes in the back of the script explaining how one does this. Just the simple direction that, on cue, you as an actor must reach into the air in front of you and pluck a lit cigarette out of nowhere.

• John Fea posts a nice video of the Man in Black singing at a 1971 Billy Graham revival at Texas Stadium. Fea writes: “Only Johnny Cash could get away with singing songs about hangovers, wishing he was ‘stoned,’ and shooting a man ‘in Reno just to watch him die’ and then follow that up with a performance at a Billy Graham crusade.”

Yep. And the great thing is that whether it was “Folsom Prison Blues” or “Peace in the Valley,” you believed every word.

• Paul McKinley is “a convicted felon who served nearly 20 years in state prison for burglaries, armed robberies and aggravated battery.” He’s also the apparent winner of the Republican primary for a special election to fill the U.S. House seat vacated by former Rep. Jesse Jackson Jr.

The candidate has not shied away from his arrest record during the campaign.

“I’m the ex-offender trying to save the next offender …” McKinley said.

If McKinley loses his House race, I’d urge him to run for Illinois governor. Since four out of the last seven of the state’s governors have ended up in prison, I think it would be refreshing to have someone pay their debt to society first, and then head to the governor’s mansion, instead of the other way around.

March 9, 2013 The Pregnant Workers Fairness Act tests the integrity of the pro-life movement
Recent Comments
73 Comments | Leave a Comment
"Today's neat thing is a whole lot of neat things.Art Nouveau depictions of women are ..."
Jenny Islander School-boards, mission boards, and the SBC
"There's a shop in a DM Academy fanmade supplement for Curse of Strahd that's straight ..."
Daniel McLellan Don’t give yourself away
"Part 3 of Jalopnik's 10-part series on the history of gasoline:https://jalopnik.com/a-brie..."
reynard61 School-boards, mission boards, and the SBC
"I've had several dreams lately where I wish I hadn't woken up when I did, ..."
Daniel McLellan Don’t give yourself away
Browse Our Archives
get the latest from
slacktivist
Sign up for our newsletter
POPULAR AT PATHEOS Progressive Christian
1