No burden, no regret in ‘fair, respectful, equal’

We’ve recently discussed the horror that awaits the poor teenager who posted a hateful “rap” to YouTube. 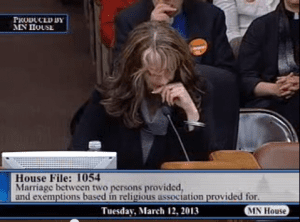 Now watch this video from today’s testimony on marriage equality before the Minnesota state Senate Judiciary Committee (via Joe Jervis).

Lynne Osterman is a Republican, a Presbyterian pastor’s kid, and a conservative former state representative. Here she describes her greatest regret from her one term in the legislature.

I didn’t come to St. Paul to single out same-sex couples and their families, but in my only term as a member … I cast a politically expedient vote in favor of DOMA and I have regretted that ever since.

What I find most striking about this testimony from Osterman — and Blankenhorn, Gregoire, and so many others — is that I have not seen any counterpart in the opposite direction.

I have never seen anyone who described their former support for marriage equality as an oppressive weight or burden that they were later joyously relieved to be rid of. I have never seen anyone weep with remorse and regret for the votes they cast or the words they once spoke in support of equal rights. I don’t recall seeing anyone moving in that direction at all.

Instead, what I have heard from those who remain opponents of equality are their descriptions of the discomfort and reluctance they feel from taking a position they often say they wish they didn’t “have to” take — their half-apologizing assurances that they wish they could say otherwise, but that as much as it grieves them they are bound by an authority that supersedes their personal preference, their conscience, their sense of what would be more loving.

March 12, 2013
'On the side of the underdog, always and everywhere'
Next Post

March 13, 2013 8 years ago: Hermeneutics
Recent Comments
42 Comments | Leave a Comment
Browse Our Archives
get the latest from
slacktivist
Sign up for our newsletter
POPULAR AT PATHEOS Progressive Christian
1