Noah’s ark, manna, and a convenient device for ignoring the inconvenient point

This time it’s John Hagee’s church in San Antonio, Texas. Hagee’s son, Matthew (whose singing is much better than his theology), says the purpose of the $5 million project is to convince people “to say it happened,” because clearly the question of historicity is the only thing that matters in the story of Noah. And because building a replica proves something happened, just like the way Peter Jackson proved the existence of Rivendell.

And what else should Hagee’s Cornerstone Church spend $5 million on? I mean, it was either this or else waste all that money on something like feeding all the poor children in San Antonio for a year. 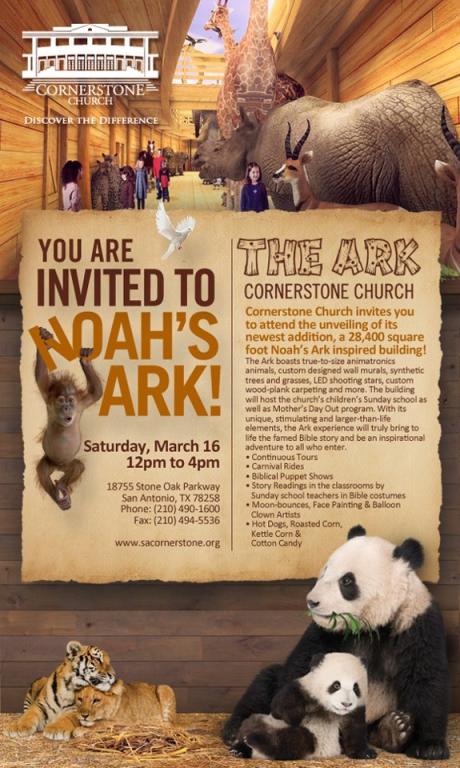 If you can’t read the image, it says:

Cornerstone Church invites you to attend the unveiling of its newest addition, a 28,400-square-foot Noah’s Ark-inspired building!

The Ark boasts true-to-size animatronics animals, custom-designed wall murals, synthetic trees and grasses, LED shooting stars, custom wood-plank carpeting and more. The building will host the children’s church Sunday school as well as Mother’s Day Out program. With its unique, stimulating, and larger-than-life elements, the Ark experience will truly bring to life the famed Bible story and be an inspirational adventure to all who enter.

I am dazzled by this. It’s so appalling that it almost wraps all the way back around into a kind of delight.

“I want them to say it happened,” Executive Pastor Matthew Hagee told mysanantonio.com. “The Ark was real. Salvation is real. What God desires for Noah, God desires for me. For Noah, it was a boat. And for me, it was Jesus Christ.”

… Hagee, son of founding pastor John Hagee, described The Ark, saying it has vestibule entrances with outdoor scenes of the ship’s hull, crafted with alder wood panels. At one vestibule will be a talking macaw playing host.

Each of the animals in the central area of the hull – from a tortoise, sheep and zebra to a rhinoceros, lion and elephant – will be named for a great church figure from history, as a springboard to lessons on John Bunyan, Dietrich Bonhoeffer, Charles Wesley and others.

Nine of the 16 creatures will be animatronic, created by Animal Makers, a Southern California firm that specializes in robotic animals for Hollywood movies. Some are new, and some were formerly leased. The rhino, for example, had a short appearance in the John Cusack film 2012.

“You’d be hard-pressed to find any church with animatronics,” Michael Chanley, executive director of the International Network of Children’s Ministry, was quoted as saying. “It communicates so much value to the family, ‘We don’t just want your kids to come here and learn. We want them to experience God,'” he said.

You’ll recall that the Apostle Paul rebuked the church in Corinth for not having animatronics. That communicated such contempt for the family, and it denied children the chance to experience God the way one only can in a sacred space like the Hall of Presidents.

I’m not sure that moon bounces, kettle corn, or a talking macaw named Hudson Taylor will really help to achieve Matt Hagee’s goal of convincing visitors of the historicity of Noah’s ark. But those carnival touches — Chaplain Mike calls it the “Disney-ization of Christianity” — serve the same purpose as that preoccupation with proving the historicity of a story that never itself demands such an interpretation. The whole point of both of those is to distract from the whole point.

Fundies and inerrantist evangelicals like to pretend that they take the Bible more seriously — and more “conservatively” — than other Christians, and yet they’re always willing to go to outlandish lengths just to avoid engaging the meaning of the text. Read them the story of Noah and they’ll start talking about the carrying capacity of all those cubits, reciting arcane non-facts suggesting that the hydrological history of the Grand Canyon “proves” there was a global flood in antiquity, or whatever else they can come up with to change the subject and avoid dealing with the actual story the text actually gives us.

The story of Noah is one of many in Genesis where, as Tim O’Brien wrote, “absolute occurrence is irrelevant.”

“Did exactly this actually occur precisely in this way?” is probably the least interesting, least insightful, least helpful, least edifying, least inspirational questions one could ask about this story. Those who make it their first question, and their most important question, seem to be trying to hide, to evade, to distract themselves from actually engaging the actual story on its own terms.

They’d rather talk about historicity — by which they mean cubits and kettle corn.

Cara Sexton has a nice, rambly post up this weekend on being a rich Christian in an age of hunger. It’s titled “On Hoarding Manna.” The reference there is to a story from Exodus 16, in which God miraculously provides bread from heaven for the Israelites in the wilderness:

When the layer of dew lifted, there on the surface of the wilderness was a fine flaky substance, as fine as frost on the ground. … Moses said to them, “It is the bread that the Lord has given you to eat. This is what the Lord has commanded: ‘Gather as much of it as each of you needs, an omer to a person according to the number of persons, all providing for those in their own tents.'”

And Moses said to them, “Let no one leave any of it over until morning.” But they did not listen to Moses; some left part of it until morning, and it bred worms and became foul. And Moses was angry with them.

Sexton’s reference to this story tackles its meaning head-on. She doesn’t flinch from the implications of it and she wrestles with those in her post.

Her approach is very different from that of the literalist evangelicals I’ve heard preach and teach from this passage. For them, the key thing was, as Matthew Hagee put it, “to say it happened,” to believe the manna was real — that the above story from Exodus 16 is a historical account of actual events. That was what they preached on and taught about. That was the first question they brought to this passage and the thing they treated as most important.

March 16, 2013
2 years ago: The paradox of pitchforks, a devilish problem
Next Post