Birth certificates and bathrooms in Arizona

Arizona state Rep. John Kavanagh has introduced a bill that would make it illegal for transgendered persons to enter what he, John Kavanagh, consider’s to be the “wrong” public restroom.

Brahm Resnik nicely summarizes the proposal in the title of a recent column, “‘Show me your papers’ — before you pee.” The bill would add the following to the state’s definition of “disorderly conduct”:

A person commits disorderly conduct if the person intentionally enters a public restroom, bathroom, shower, bath, dressing room or locker room and a sign indicates that the room is for the exclusive use of persons of one sex and the person is not legally classified on the person’s birth certificate as a member of that sex.

So Kavanagh’s bill specifically targets one minority group — transgendered people — for legal harassment. That’s unfair and unjust, but let’s bracket those very important matters of fairness and justice for the moment and just consider what it would take to enforce a law like this.

Resnik worries that this bill would, in effect, require all transgendered persons in Arizona to carry their birth certificate with them at all times. But it wouldn’t do that.

It would, instead, require everyone to carry their birth certificate with them at all times.

Including good, straight, white, Christian citizens of Arizona — the sort of people Kavanagh had no intention of harassing with this legislation. His bill is intended to exclude certain people from public accommodations — people he doesn’t particularly care about burdening. But the only way to do that is to require everyone to be able to prove that they’re not one of the people he’s targeting. Kavanagh only intends for his bill to affect the lives of transgendered Arizonans, but in practice it would mean that every person in Arizona would be required to be able to demonstrate that the gender “legally classified on that person’s birth certificate” met the standards of his proposed law.

Kavanagh simply hasn’t thought this through. His motive for this proposal — fear of the other — is similar to the motive behind many Jim Crow laws and other race-based forms of legal discrimination, so Kavanagh turns to them as models for his bill. It’s the same basic approach his party has taken in Arizona to the legal harassment of Latino and Hispanic people — legislating the presumption of illegitimacy for anyone who appears not to conform to his preferred norm and requiring such citizens to provide constant, elaborate documentation of their claim to equality under the law.

Think of the routine police harassment of black motorists sardonically referred to as “DWB,” or driving while black. That’s a relatively simple form of legal discrimination because it’s based on a visually apparent distinction. A Radnor cop sits in his cruiser alongside Lancaster Ave. — the main artery of Philadelphia’s “Main Line” suburbs — and he peers through the windshield of every passing car until he sees a black driver he can pull over for, say, driving 27 in a 25 mph zone. (To be fair, Radnor police don’t exclusively pull over black motorists — they also occasionally pull over white Villanova students.)

But such selective legal harassment of a particular population is a much trickier business when that population is not visually distinct. I took the picture below in Jerusalem in 1990. 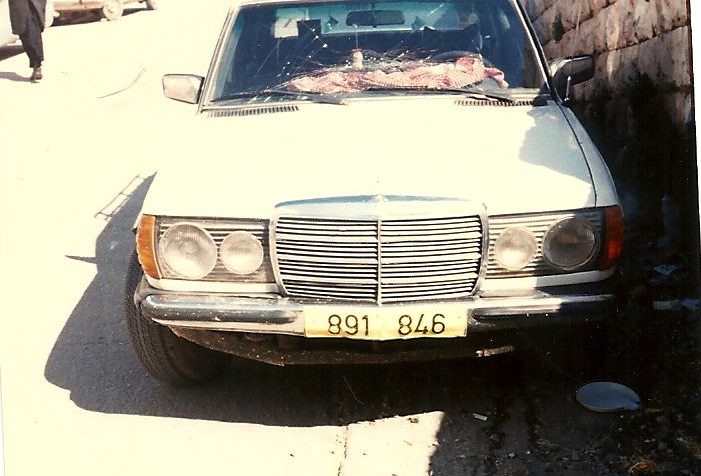 It’s not easy to peek through a windshield to determine whether the driver of a car is Israeli or Palestinian — the difference is not visually obvious. So to allow a simpler visual distinction, Israel uses color-coded license plates. I’m not sure what the code is today, but in 1990 it was yellow plates for Israeli drivers and blue plates for Palestinian drivers. Thus the only way for Palestinians to get around easily without being repeatedly pulled over, pulled aside, and required to produce documentation was to get a car with yellow plates.

The rough solution, then, was to drive a car with yellow plates, but to display a keffiyeh head scarf on the dashboard. That signaled “Yes, I have yellow plates, but please don’t throw stones, I’m one of you.” The police and the IDF knew about this signal too, of course, and if they saw the keffiyeh on the dash, they’d respond just as though the car had blue plates. And Israeli drivers also learned the keffiyeh trick, which they’d use as a way to avoid becoming a target for stones.

This technique required some agility involving the quick removal or replacement of the scarf, depending on where one was driving. Too quick or too slow and you could end up either detained at a checkpoint or paying for a broken windshield — as in the photo. (I have no idea if that car belonged to a Palestinian driver using Israeli plates or to an Israeli driver using a Palestinian keffiyeh.)

The point here being that legal discrimination gets really complicated when it’s premised on traits that do not involve visually apparent distinctions. Without a simple visual distinction, any attempt to harass one visually indistinct group will wind up making life miserable for everyone from every group.

Please don’t misunderstand me — I’m not in any way saying that legal discrimination or legal harassment based on visually obvious distinctions is in any way right or good or acceptable. I’m only saying it’s logistically more simple.