“If the trumpet does not sound a clear call, who will get ready for battle?”
— 1 Corinthians 14:8

Evangelical author Jim Wallis, a longtime peace and anti-poverty activist, has finally announced his support for marriage equality. Or, rather, has finally conceded that he will no longer oppose same-sex marriage.

What Wallis actually said, in an interview with Marc Lamont Hill of Huffington Post, was this:

WALLIS: We’re losing marriage in this society. I’m worried about that — among low income people, but all people. How do we commit liberals and conservatives to re-covenanting, reestablishing, renewing marriage? 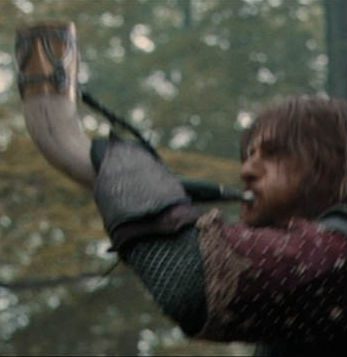 HILL: Men and women? Or men and men?

WALLIS: I think we should include same-sex couples in that renewal of marriage. I want to talk about marriage first. Marriage needs some strengthening. How do we re-covenant a permanent commitment that’s — to parenting is really important to the common good. But then, let’s start with marriage, and then I think we have to talk about, now, how to include same-sex couples in that deeper understanding of marriage. And that could be the common ground. So, yes, I support equal protection under the law. I always have.

HILL: But same-sex marriage as such, would you support it?

WALLIS: I think that’s what, equal protection for many, many people, including young evangelicals, is becoming marriage equality. What I’m saying is let’s not just argue that issue back and forth, let’s go to a deeper commitment to marriage that’s inclusive. I want it to be inclusive. So my answer is yes. But I want a deeper commitment to marriage that is more and more inclusive. And that’s where I think the country is going.

After being pressed three times for a straightforward answer, Wallis finally said, “My answer is yes, but.”

Contrast that with Steve Chalke’s announcement of his support for marriage equality. Chalke, a well-respected British evangelical leader, had a lot to lose, but he stepped forward — on his own initiative — and sounded a clear trumpet before what he knew would be a hostile audience. That is what leadership looks like. That is what being a “prophetic” voice means.

In an interview with the Huffington Post’s Jaweed Kaleem last week, Wallis described what motivated him to write yet another book about How Everything Would Be Divine If Everyone Listened To Jim Wallis. (Especially you, ladies!) “The vitriol. The screaming. The polarization. The paralyzation. The hate. The fear. And I thought we’ve lost something really significant, this ancient idea called the common good.”

Oh, man, don’t you wish all those gay and lesbian people who simply wanted to have the same rights as straight people would stop with all their vitriol and screaming? Jeez.

As part of his book roll-out with the Huff Po team, Wallis gave a video interview to Marc Lamont Hill, who opened it with reminding Wallis that “you’re a leader of the religious left.” … In true “leader” form, when asked by Hill about same-sex marriage, Wallis replied, “this issue is changing rapidly,” noting that “young believers, 62 percent of young evangelicals now support marriage equality.” Because that’s what leaders do. They wait for public opinion to tell them how to lead. And then they wait for an interviewer to push them to speak plain English — and even then they use behind-covering doublespeak.

It’s lovely that Wallis is “evolving” on granting my marriage the same protections his has — truly. But in point of fact it is long past time for one purporting to be “a leader of the religious left” to support a Protect Marriage Movement that protects all marriages and Family Values that value all families.

It’s one embarrassingly small leap for mankind. … Let’s not pretend Wallis is a role model here. Role models do the right thing no matter how tough it may be, not wait for the political climate to change and then jump on the bandwagon that other people built.

Although I haven’t been in touch with him for many years, Jim Wallis is an old friend. I knew him back when he still had the beard — before the TV-friendly makeover and before his books came out in prestigious hard-cover editions. We worked together repeatedly throughout the 1990s and I remain fond of him. I like the guy and I retain respect for him.

But I’m not going to try to defend him from this criticism. I couldn’t even if I wanted to, because it’s accurate and richly deserved.

What I want to try to do, instead, is to explain Wallis’ blind-spot here — to explore why even though he really has been for many years a “prophetic” voice on economic justice, he has been the opposite of that for LGBT people for just as long.

I covered some of this previously two years ago when Wallis recoiled in fear from running a “Believe Out Loud” ad in his Sojourners magazine (see “My hope is built on nothing less” and “Jim Wallis and Believe Out Loud, Part 2“). At that time I wrote this about Wallis:

Wallis is, like my one-time boss Ron Sider, an evangelical Christian. Wallis and Sider have both been radical, prophetic voices on economic justice because they are evangelical. Their long-time, staunch commitment to justice for the poor arises from their evangelical faith. The only thing that distinguishes them from the rest of the white evangelical subculture is that they’ve read more of the Bible. And they’ve read it with the same evangelical eyes — the same “common-sense,” face-value, “literal” approach.

For most white American evangelicals, that approach starts and stops with a very selective selection of Bible verses. It’s mainly focused on the passages involving sex. But the Bible has a great deal more to say about money — about wealth, poverty, possessions, justice, widows, orphans, aliens and the downtrodden — than it does about sex.

If you’re familiar with Wallis, you’ve probably heard him talk about the “more than 2,000 verses” in the Bible that deal with economic issues. What if one reads those 2,000+ verses and responds to them in exactly the same way that most white evangelicals respond to the far smaller set of verses dealing with sexual morality?

The point here is that Wallis and Sider never really disagreed with the substance of the sexual politics of the religious right, but mainly with what they saw as its misplaced priorities. For Wallis, the Bible’s 2,000+ clobber texts on wealth, poverty and possessions made that issue a greater priority than the six infamous clobber texts on homosexuality. But he still tended to approach the Bible as an evangelical reader — regarding clobber texts as authoritative and clobber-texting as a valid, proper hermeneutic.

I think this is a mistake — a bad process that leads to bad conclusions. I don’t think clobber-texting is a valid hermeneutic. I don’t think it’s a hermeneutic at all. But I do respect Wallis and Sider for the integrity and consistency they have shown in allowing that evangelical approach to apply to far more of the Bible than most other evangelicals are willing or able to allow.

But there’s also another side here. Or, rather, there’s also The Other Side here. And that suggests another, more insidious, dynamic at work in Wallis’ long-time avoidance of LGBT equality.

Back in the day, Sojourners magazine had a kind of cousin-publication called The Other Side. TOS was a radical, progressive magazine published by an “intentional community” of evangelical Christians based in a rough part of Philadelphia’s Germantown neighborhood (just up the block from Sider’s house, actually).

Unlike Wallis’ Sojourners, TOS was unqualified in its support for the full equality of LGBT people in the church and under the law. This was, for TOS, an imperative of the Golden Rule and a biblical mandate based on the same kind of radically reconciling, radically inclusive hermeneutic that Steve Chalke would arrive at decades later. They championed this cause forcefully and presented their arguments for it clearly and biblically.

That meant they were shunned and ignored by the very people they were trying to reach. And it meant they were cut off from the Christian sources of funding they needed to become sustainable. Other funders helped to bridge the gap for a while — Mr. Cockburn chipped in from Canada, and the Hewsons sent checks from Dublin, among others — but financial support from American Christians was never enough to make the publication viable. It limped along for a while before gradually fading away and closing shop in 2005. (Dee Dee Risher wrote a tribute to TOS in Sojourners that year titled, “A Clarion for Justice.” Talk about sounding certain trumpets.)

I think Wallis and Sider took two lessons from the noble failure of The Other Side. First, they learned that the evangelical audience they were called to reach would never be willing or able to hear their message of economic justice if they were in any way perceived as “pro-gay.” And, unpleasantly, they learned that the funding they relied on from evangelical donors would disappear if they strayed from the subculture’s officially approved “stance on homosexuality.” That latter lesson wasn’t one they needed to learn from TOS — it was something many of those donors themselves stated, sometimes explicitly.

Remember, though, that Wallis did not agree with The Other Side. His clobber-texting approach couldn’t accommodate their interpretation of those clobber texts. So it wasn’t that Wallis was fearfully being disingenuous — stating one thing publicly while secretly believing the opposite in private. He really was opposed to LGBT equality because he really believed the Bible required that of him. (I know this because we discussed this in the early ’90s, and at that time, unfortunately, I agreed with him.)

So the point here is not that the constant threat of financial reinforcement of the tribe’s anti-gay “stance” prevented Wallis from stating his mind. But I think that — for far too long — that threat contributed to preventing Wallis from changing his mind. It prevented him from allowing himself to question the strictly enforced official “stance.”

And when you don’t ask questions, you’re not leading. You’re following.

When it comes to marriage equality, Wallis still seems to be a follower. But at least now he’s following a better set of leaders.