It seems I won’t get today’s installment up today.

I want to step back from the pages of Nicolae this week to look at Steve Fouse’s helpful, if somewhat confused, profile “Tim LaHaye, the Bible Belt, and the Sun Belt: More Complex Than Kansas.” 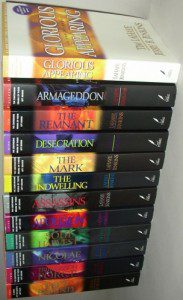 Fouse did some hard work with LexisNexis to paint a picture of LaHaye’s influence and agenda during the later decades of the 20th century, and there’s a lot of interesting stuff in this article. Unfortunately, it’s all directed toward a thesis about the “complexity” of the religious right agenda that pretty much proves the opposite of what Fouse thinks it does. (Yes, reflexive anti-feminism and a terrified reaction to modernity comes in more than two simple flavors. But no, that doesn’t really make it “complex.”)

That leads to the bewildering conclusion that LaHaye retreated from politics, “creating a popular fictional series that had little or no political effect.” Unpacking the multiple layers of epic wrongness in that claim is taking a bit longer than I’d planned, so we’ll get to that tomorrow.

In the meantime, here are a couple of videos to illustrate how little influence and political effect Tim LaHaye’s apocalyptic eschatology has in America in 2013. First, Pat Robertson explaining that America risks “the wrath of Almighty God” by pursuing a Middle East peace plan:

And second, Rachel Maddow contrasts MSNBC and CNN’s coverage of President Obama’s trip to Israel with the coverage from Fox News:

April 13, 2013 3 years ago: L'affaire Waltke
Recent Comments
37 Comments | Leave a Comment
"There's always a backlash to progress. It can be bad, but rarely pushes things back ..."
Cobalt Blue Postcards from the class & culture ..."
"Yeah, I take your point, it's always been awful. I guess I just want...improvement? Like, ..."
Sexydweeb Postcards from the class & culture ..."
"As a Quaker (Friends General Conference - we do not proselytize), I've never understood evangelizing ..."
Patrick McGraw ‘Our American Cousin’
"Now I want to hear a 16-bit version of "This Corrosion.""
Patrick McGraw ‘Our American Cousin’
Browse Our Archives
get the latest from
slacktivist
Sign up for our newsletter
POPULAR AT PATHEOS Progressive Christian
1