Tone-deaf with perfect pitch: A new plan to chase young people away from the church, one-by-one

Tone-deaf with perfect pitch: A new plan to chase young people away from the church, one-by-one April 18, 2013 Fred Clark

So last week I posted a link to a terrific Open Letter to the Church by Dannika Nash.

Nash warned that her generation of young people were leaving the church in droves because the church was pushing them out the door with an ultimatum in which they were forced to choose between staying with the church or loving their LGBT friends:

The Church keeps scratching its head, wondering why 70 percent of 23-to-30 year-olds who were brought up in church leave. … My generation, the generation that can smell bullshit, especially holy bullshit, from a mile away, will not stick around to see the church fight gay marriage against our better judgment. It’s my generation who is overwhelmingly supporting marriage equality, and Church, as a young person and as a theologian, it is not in your best interest to give them that ultimatum.

And how was this open letter received? With the church doubling-down on its ultimatum, as Jill Callison reports for the Sioux Falls Business Journal:

That stance also cost Nash her summer job as a counselor at a church camp.

She was sitting in a coffee shop with her boyfriend when the camp director called to politely, regretfully dismiss her.

“I just cried in public,” Nash says. “People probably thought (my boyfriend) was breaking up with me. The place and the people are really, really important to me, and even though I knew I was risking that a bit with the blog post, it hurt to have it taken away.”

If you’re going to be a moronic asshat, I suppose it’s better to do so “politely” and “regretfully,” but that doesn’t change the fact that the director of this church camp is a moronic asshat. 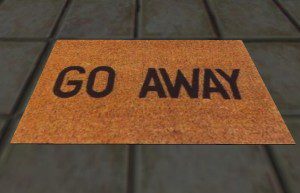 Maybe this church camp director just couldn’t resist the rare opportunity for a moment of sheer perfection. We’re often given a chance to do the wrong thing, but how often is any of us given such a golden opportunity to do something so precisely and so utterly wrong? There’s almost a kind of beauty in how exactly wrong this particular response was to this particular open letter. It’s like his tone-deafness has perfect pitch.

Or maybe this the some new church-growth strategy. Instead of sitting idly by and watching the Millennials drift away from the church en masse, the new plan is to call them all one-by-one in order to “politely, regretfully” inform each young person in America, individually, that he or she is no longer welcome in our congregations.

Or maybe the plan isn’t to push away every young person personally. Chase enough young people away publicly like this and the rest will get the message.

But whatever their strategy, the end goal is clear. These folks will not be satisfied until every single young person leaves the church and vows never to return.

Communication is Lubrication: Speaking in Tongues
What it is that really gets the fluids flowing and amps up...
view all Progressive Christian blogs
What Are Your Thoughts?leave a comment
Copyright 2008-2021, Patheos. All rights reserved.
error: Content is protected !!