Here’s a song by Macklemore and Ryan Lewis that cites Martin Luther King Jr., the Apostle Paul and Curtis Mayfield. Quite a compelling combination:

And here’s part of a beautiful essay by Dannika Nash about, in part, hearing that song in concert in red-state South Dakota: “An Open Letter to the Church From My Generation.”

The Church keeps scratching its head, wondering why 70 percent of 23-to-30-year-olds who were brought up in church leave. I’m going to offer a pretty candid answer, and it’s going to make some people upset, but I care about the Church too much to be quiet. We’re scared of change. We always have been. When scientists proposed that the Earth could be moving through space, church bishops condemned the teaching, citing Psalm 104:5 to say that God “set the earth on its foundations; it can never be moved.” But the scientific theory continued, and the Church still exists. 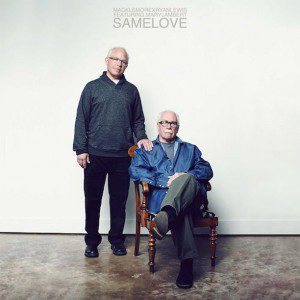 I’m saying this: we cannot keep pitting the church against humanity, or progress. DON’T hear me saying that we can’t fight culture on anything. Lots of things in culture are absolutely contradictory to love and equality, and we should be battling those things. The way culture treats women, or pornography? Get AT that, church. I’ll be right there with you. But my generation, the generation that can smell bullshit, especially holy bullshit, from a mile away, will not stick around to see the church fight gay marriage against our better judgment. It’s my generation who is overwhelmingly supporting marriage equality, and Church, as a young person and as a theologian, it is not in your best interest to give them that ultimatum.

My whole life, I’ve been told again and again that Christianity is not conducive with homosexuality. It just doesn’t work out. I was forced to choose between the love I had for my gay friends and so-called biblical authority. I chose gay people, and I’m willing to wager I’m not the only one. I said, “If the Bible really says this about gay people, I’m not too keen on trusting what it says about God.” And I left my church. It has only been lately that I have seen evidence that the Bible could be saying something completely different about love and equality.

So, my advice to you, the Church: if you’re looking for some intelligent biblical liberal opinions on the subject, have a little coffee chat with your local Methodist or Episcopal pastor. Christians can be all about gay people, it’s possible. People do it every day with a clear biblical conscience. Find out if you think there’s truth in that view before you sweep us under the rug. You CAN have a conservative view on gay marriage, or gay ordination. You can. But I want you to have some serious conversations with God, your friends that disagree with you, and maybe even some gay people, Christians or not, before you decide that this one view is worth marginalizing my generation. Weigh those politics against what you’re giving up: us. We want to stay in your churches, we want to hear about your Jesus, but it’s hard to hear about love from a God who doesn’t love our gay friends (and we all have gay friends). Help us find love in the church before we look for it outside.

April 9, 2013
The minor notes that come to serenade you
Next Post