We had a plague of locusts across the Middle East, at Passover no less. Then we had a two-headed shark. So it’s no wonder that National Public Radio is asking “How Close Is Doomsday?” or that books about “The Antichrist” are big business all over the world.

Here’s a roundup of some other news and commentary about “Bible prophecy,” the End Times, etc. 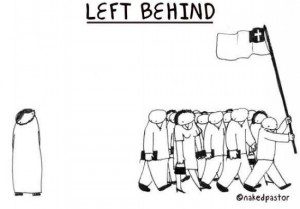 • Chad Thomas Johnson remembers the day his parents were raptured. (Spoiler alert: Not really — they were just up the street talking to the neighbors. But everybody who grew up in post-Hal Lindsey evangelicalism has a story like this one.)

• Chris Stewart has been called “the Mormon Tim LaHaye” due to his own series of novels based on “Bible prophecy” — The Great and Terrible. He’s now Representative Chris Stewart, R-Utah. Stewart is convinced that the end is nigh and that the planet is doomed to soon suffer an apocalyptic cataclysm. And like LaHaye, he believes this is prophesied and is thus a Good Thing.

But Stewart doesn’t much care for talk of other potential cataclysms and calamities. Like climate change, for instance, which he says isn’t a real threat. A bigger threat, he says, is the existence of the Environmental Protection Agency, which he wants to abolish.

• The End of Days has come for “Bible prophecy scholar” Dave Hunt. Hunt died in his 87th year. He never expected to reach such an age — not because he thought he’d die sooner, but because his “Bible prophecies” quite clearly taught that the Rapture and Tribulation and Millennium and all that were going to come way sooner than 2013. Hunt began preaching the imminent End back in 1973 — that’s four decades of being wrong.

• The Seventh-day Adventists have been wrong much longer than that. They’re marking 150 years of being completely, totally wrong about the imminent End of the World. As Daniel Burke notes for Religion News Service, the anniversary comes with some embarrassment:

Back in the 1860s, the founders of Seventh-day Adventism preached that Jesus would return – and soon. That’s why they called themselves “Adventists.” By Second-Coming standards, the church’s long life could be considered a dismal sign of failure.

“If you took a time machine and visited our founders in May 1863, they’d be disconcerted, to say the least, that we’re still here,” said David Trim, the church’s director of archives and research.

… Adventist leaders say the apocalyptic pull is still strong at church headquarters, especially during planning sessions. “I see that in our education system,” said [church director of education Lisa] Beardsley-Hardy. “Not wanting to over-invest in building because Jesus is coming.”

Beardsley-Hardy said she feels the same tension in her personal life. Should she sock away extra money in her retirement account, she wonders, or gratify immediate needs?

• Meanwhile, other Armageddon-loving Christians are doing both — planning for the future and gratifying immediate needs. They’re desperately searching for the next Left Behind or Great and Terrible series of books or movies that will keep the cash pouring in for several more decades of being lucratively wrong about the imminent End of the World. I hope the Lord tarries long enough for me to see the upcoming Left Behind “reboot” with Nicolas Cage and Ashley Tisdale. Vorjack heightens my anticipation with a look back at some of the other fine films from the Cloud Ten studio producing the new movie. Corbin Bernsen and Mr. T? Oooh.

• But just because these “Bible-prophecy” books and movies are ridiculous and poorly executed doesn’t mean they’re not influential. They’re quite effective at reinforcing beliefs that some people want to believe — as demonstrated by the recent PPP survey that found: “13 percent of voters think Barack Obama is the Antichrist, including 22 percent of Romney voters.”

Don’t laugh. Our Adventist friends aren’t the only ones reluctant to invest in education and in retirement security because they think the world is about to end. The PPP survey shows that’s the view of about a third of Republican voters (another 19 percent of whom are “unsure” whether or not President Obama is the Antichrist).

• What does LaHaye-ism and “Bible prophecy” mania look like when it’s translated into politics and policy? Well, it means that idiots like Michael Farris — head of the Christianist home-schooling racket — get to rave about Nicolae Carpathia’s United Nations without being dismissed as lunatics. Sen. Rand Paul takes his cues directly from the Left Behind series when he calls for the United States to withdraw from the U.N. (Does Sen. Paul say stuff like this because he’s a true-believer in Anti-Antichristianity? Or is he just sucking up to Anti-Antichristian voters? I’m not sure it matters.)

• And if you’re looking for a recent example of Tim LaHaye’s paranoid, Neo-Bircher, anti-U.N., Anti-Antichristian panic influencing American politics, look no further than the defeat in the Senate last week of gun safety legislation for background checks to keep guns out of the hands of criminals and the mentally ill. That defeat came about due to weird conspiratorial lies about an imaginary “national gun registry.” That’s what happens when the Senate is controlled by a minority of members who believe that Barack Obama is Nicolae Carpathia.

Revelation suggested that the empire’s economy, built on injustice, was ultimately doomed to collapse, taking with it the economic systems too dependent on it. On the one hand, Revelation offered comfort and hope of a better future for the suffering churches. To those churches that were complacent about others’ sufferings, however, the book sounded a stark warning: there is a God of justice, and those who unjustly indulge their comforts at the expense of others will one day have to face reality.