Liberals continue their attack on the authority of scripture

Once again, those progressive, mainline Protestant and liberal Jewish types are teaming up with the Obama White House to defy clear biblical teaching.

In explicit denial of the authority of scripture, these postmodern, anything-goes folks are calling for a “Global Fund to Eradicate Modern-Day Slavery.” 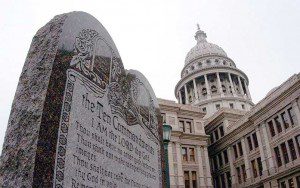 God is not mocked. If we turn our backs on the absolute truth of scripture and deny the authority of its clear teaching on the traditional institution of slavery, then we no longer have any basis for morality, meaning, truth or virtue. We lose our foundation, our anchor, and we are adrift. We become godless nihilists, or we set ourselves up as God.

This is how it always begins. People claim that their idea of morality should replace what the Bible tells us. They start out by attacking a God-given institution blessed by scripture and eventually they wind up calling for the abolition of all Ten Commandments.

It’s no coincidence, after all, that the same people seeking to “eradicate” slavery also deny that thy neighbor’s wife is his property. No wonder these people don’t want to see the Ten Commandments posted in our courtrooms. They hate the Word of God.

This is how things started in Germany. But where are the modern-day Bonhoeffers who will stand up against this anti-biblical crusade? Unless Christians take a bold stand in defense of clear biblical teaching, this will lead to the end of the Christian nation the Founding Fathers envisioned.

Once you come to see things this way, you’ll learn to decode the language of these “progressive” so-called Christians. You’ll come to understand that when you hear talk of things like a plan to “eradicate modern-day slavery,” what you’re really seeing is a plan to overthrow the traditional institutions established by the Bible. What you’re really seeing is a denial of the authority of scripture and a plan to persecute American Christians.

Update: Dr. James Dobson summarizes the gravity of the situation:

I am writing you this month about the institution of slavery, which is rocking and reeling like a ship on a stormy sea. Attacks on its stability and integrity are coming today from every major center of power. Each seems determined to redefine slavery and destroy its underpinnings. This 5,000-year-old institution, dating back to the dawn of humankind, is almost defenseless against the federal judiciary, the White House, the Congress, the Entertainment industry, large corporations, the Education monopoly, and the entire liberal movement. If people of faith don’t come to the aid of traditional slavery very quickly, it will be damaged beyond repair. …

April 30, 2013
3 years ago: Empathy and epistemic closure
Next Post