Jubilee: Why Old Man Potter is bad for business in Bedford Falls

The Insight Center for Community Economic Development crunches the numbers and confirms what everybody in Bedford Falls already knew: Debt-slavery to Old Man Potter isn’t good for the community.

The huge fees — the Consumer Financial Protection Bureau calculates the average APR on a payday loan is 392% — may make billions for lenders, but would be better for the economy if spent elsewhere. 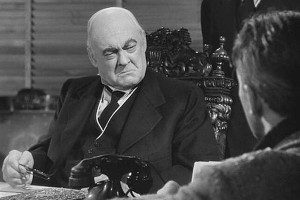 The economic activity generated by payday lending firms receiving interest payments is less than the lost economic activity from reduced household spending. Specifically, each dollar in interest paid subtracts $1.94 from the economy through reduced household spending while only adding $1.70 to the economy through spending by payday lending establishments.

As a result, for each dollar of payday lending interest paid, an estimated 24 cents is lost to the U.S. economy.

For example, a payday loan that carries an interest payment of $40.00 causes a loss of $9.60 — nearly one-quarter of the fee — from the economy.

The researchers calculate that for 2011, during which payday lenders took in an estimated $3.3 billion in interest, the net loss to the U.S. economy was $774 million, as household spending tends to outpace spending by payday lending businesses.

That’s a lot of numbers and figures and calculations, but just focus on that last line: “Household spending tends to outpace spending by payday lending businesses.”

Old Man Potter collects that $3.3 billion in interest every year and only spends part of it on his household staff, limousine maintenance, imported cigars, etc. The rest of it just sits there in giant piles that Potter sometimes swims through Scrooge-McDuck-style, but otherwise doesn’t put to any productive use.

If the working-class households had been able to use that $3.3 billion for something other than enriching the already too-rich Potter, they’d have spent all of it much more widely — circulating it throughout more of the economy where more of it would be put to productive use. They’d spend it at the butcher, the baker, the barber, Martini’s restaurant, the grocer, the deli. All of those businesses would benefit from the income and they would, in turn, spend it again elsewhere, further benefitting the whole community.

May 20, 2013 4 years ago: Hell and the Credit-Card Lobby
Recent Comments
229 Comments | Leave a Comment
"Texas tries to re-write it's history by playing up it's mythology:https://www.texasobserver.o..."
reynard61 Oops
"Pro-COVID?"
ohiolibrarian May 20 Flashback: ‘Papers, bitte’
"I dreamt of angels, except these angels were four legged birds big enough to pull ..."
Brigid'sFlamekeeper Oops
"trying to carbon date dinosaur bonesYou can't do that, because dinsosaur fossils have completely (or ..."
Matthew Funke Oops
Browse Our Archives
Related posts from slacktivist