The lies of Exodus were a bearing wall for evangelicalism

The lies of Exodus were a bearing wall for evangelicalism June 20, 2013 Fred Clark

Alan Chambers, ex-leader of ex-ex-gay “ministry” Exodus International, concluded his blunt apology yesterday with what seems to be a pledge to redeem himself and to help heal the people, and the church, he and Exodus have wounded:

For the rest of my life I will proclaim nothing but the whole truth of the Gospel, one of grace, mercy and open invitation to all to enter into an inseverable relationship with almighty God.

Chambers, a former pastor at a large Assembly of God church, is an evangelical Christian who is here using evangelical language — the language of conversion, of Amazing Grace, of “I once was lost … I once was blind.” 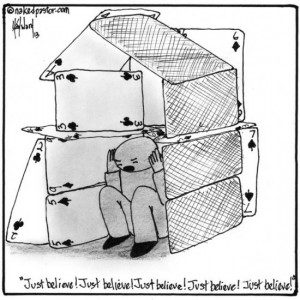 So what follows conversion? Will this be a Zacchaeus moment for Alan Chambers? What would it mean for him to say, like the redeemed oppressor in the Gospels, that he will repay those he has defrauded “four times as much”?

And, if he does that, will any of Exodus’ former supporters in American evangelicalism follow that example? Will the culture-warriors of the religious right and the tribal gatekeepers at Christianity Today also repent of the fraudulent cruelty of “ministries” like Exodus after praising them and supporting them for so many years?

But again, this is about repentance and conversion. That doesn’t mean cosmetic changes in tone or a tweaking in strategy, it means a transformation of identity. Alan Chambers seems to be a man whose sense of identity has been shaken and, if we can take him at his word, a man who is seeking to leave behind who he has been in order to become someone new.

I don’t see the culture-warriors and gatekeepers being willing to do that.

But the lies Exodus represented and promoted were critically important for the white evangelical “worldview” here in America. Evangelicals’ treatment of LGBT people could only be defended by the false claim that such people were making a “lifestyle choice” — that they were willful sinners choosing sin who therefore deserved to be shunned, deserved to be denied full participation in the church, deserved to be denied full legal equality and civil rights. Without that lie, all that remains is transparent malice, a naked refusal to love our neighbors, and an unseemly eagerness to puff ourselves up by stomping down on those we can outnumber and overpower.

Exodus International is no more. But for American evangelicalism, Exodus was a bearing wall — a vital support column. It propped up the illusion that evangelical culture-warriors have any claim to the moral high ground. And, even more fundamentally, it propped up an otherwise unsustainable proof-texting hermeneutic. Without the support of Exodus’ lie, evangelicals would need to, in Tim Keller’s words, “Completely disassemble the way in which they read the Bible. Completely disassemble their whole approach to authority.”

Actually, Keller isn’t quite right there. Evangelicals won’t have to “completely disassemble the way in which they read the Bible.” It won’t need to be disassembled because it’s already falling apart on its own. It’s an unsustainable structure, a house built on shifting sand. All evangelicals would need to do is abandon the exhausting project of desperately trying to prop it up with bad science, bad-faith arguments, and false witness borne against our neighbors.

And Keller was completely wrong to suggest that this would involve evangelicals having “to completely kick their entire faith out the door.” Abandoning a failed hermeneutic for one that can be reconciled with reality and with the Golden Rule hardly constitutes apostasy or the rejection of faith. Does Keller mean to suggest that Steve Chalke is no longer a Christian? (If not, then what is the point of such hysterics? Keller seems to be confusing the boundaries of tribal gatekeepers with actual theology. Or perhaps engaging in a question-begging argument in which Chalke’s assessment of the anti-gay clobber verses can be pre-emptively dismissed because Chalke comes to tribally unacceptable conclusions and is, therefore, not really an evangelical and therefore can be ignored.)

The lie of “reparative therapy” and of “ex-gay ministry” was unsustainable. A clobber-verse hermeneutic built on top of that lie is also unsustainable. Evangelical Christians who are shocked or startled by Alan Chambers’ apology and shuttering of Exodus don’t yet seem to fully realize that they will — sooner rather than later — face the same decision, the same kairos and crossroads, that Chambers faced.

It will be very, very interesting to see what they decide to do.

June 21, 2013 8 years ago: Constituencies
Recent Comments
75 Comments | Leave a Comment
Browse Our Archives
get the latest from
slacktivist
Sign up for our newsletter
POPULAR AT PATHEOS Progressive Christian
1