For more than a dozen years, supporters of DOMA, the federal law banning the recognition of same-sex marriages, have advocated a constitutional amendment saying the same thing as that law. Because they knew, and we knew, and everybody knew that DOMA was unconstitutional. 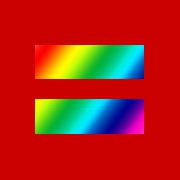 After all, there’s really no point in even bothering with things like laws and rights and constitutions if at any point the majority can just start passing laws denying legal rights to minorities they don’t like.

“The Constitution’s guarantee of equality ‘must at the very least mean that a bare congressional desire to harm a politically unpopular group cannot’ justify disparate treatment of that group,'” Justice Anthony Kennedy wrote in the Supreme Court’s 5-4 decision.

Wonkblog has one of it’s very helpful explainers posted: “The Supreme Court struck down DOMA. Here’s what you need to know.” Dylan Matthews offers a nice overview of what this decision does and does not mean.

From the Human Rights Campaign:

In recent years, California’s Proposition 8 and the discriminatory Defense of Marriage Act became symbols of anti-LGBT discrimination around the country and around the world. Today, both crumbled.

In a watershed moment in the fight for equality, the United States Supreme Court today ruled to return marriage equality to California and to strike down DOMA. The court ruled in the Prop 8 case on procedural grounds, not reaching a decision on the merits of Prop 8 or the broader question of whether the Constitution guarantees the fundamental right to marry the person you love.

Marriages in California are expected to begin again soon. While a joyous milestone, these victories nonetheless throw into sharp relief the uneven progress for LGBT people around the country — a landscape where states like California are rapidly advancing toward equality, but progress in many other places remains stagnant.