William Lindsey points us to Neil Steinberg’s recent column, which I’m tempted to quote here in full. It’s titled “Anti-gay bias loses its legal whip,” but really Steinberg’s topic is sectarian coercion — the ability to require others, by law, to follow the particular dictates of your own sect. That’s a bad idea, Steinberg suggests, and an unjust and unfair thing to do. Your religion will be better off not trying to coerce everyone else to obey your religious law, he says:

The question remains: How can McDonald’s sell cheeseburgers, violating Jewish law? Not a toughie. Answer: Because the laws of kosher don’t matter to anyone but observant Jews. … Jewish dietary law has no bearing on secular law. Jews, a scant minority, are uninterested in trying to force their arcane practices upon non-believers. … 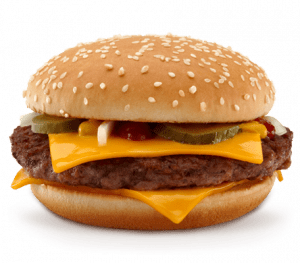 Anti-gay Christians are now approaching their cheeseburger moment — welcome, welcome — after the Supreme Court has tossed out much of the Defense of Marriage Act and California’s Proposition 8. The legal whip drops from the fundamentalist hand, which strikes them as oppression, forgetting they can still practice whatever private dogma they like regarding gays — never marry their own gender, disown their own gay children — but gay marriage is going up on the menu in more and more states. Society is marching — running, really — off without them, into a future of gay folk living openly without fear.

It hurts, bubbie, I know. Here’s a Kleenex.

You’ll get used to it. Take it from a Jew. You get used to the world not singing along with your religious peccadilloes. (Not that keeping kosher and discriminating against gays are comparable, except as religiously inspired irrational acts). No harm in cleaving to your faith in the midst of a carnival of all you don’t believe. At Christmas, it isn’t like I suffer through all these foreign practices — caroling, wassailing, midnight massing. I accept them with humility — it’s not my party, but it’s someone’s party. It isn’t all about me.

That’s an astute point, but it’s likely to fall on deaf ears among the sort of Christians who have half-convinced themselves that being wished “Happy Holidays” at the mall constitutes a form of religious persecution. “It isn’t all about me” isn’t likely to get through to the foot soldiers of the “War on Christmas.”

Steinberg contends with a typically mendacious statement from the Liar Tony Perkins, then wraps up with this:

There is a bedrock truth below all this, one that would have been unchanged no matter what the court ruled: Gay people don’t make worse spouses, or parents, or friends. If they did, chuckleheads like Perkins would wave any scrap of evidence like a flag. But there is none, so bigots have to try to twist these advances into some kind of religious oppression — that hating gays is a bedrock of Christian faith and to try to change that is persecution.

Good luck with that one. Ask the next rabbi you see if he feels oppressed because the United States government doesn’t enforce Jewish dietary laws. He’ll take a step back — distancing himself from the crazy person — and say, “No, and believe me, we know what real oppression is.” That’s where Perkins et al. will be in 50 years, only their privately held torch will not be a harmless dietary quirk, but a shameful, refuted hatred gilded with a thin, worn and crumbling veneer of faith.

That same twisted claim — “that hating gays is a bedrock of Christian faith and to try to change that is persecution” — also concerns Dave Gushee in his recent Religion Dispatches essay, “Christians v. Gays: The Damage Done.”

Gushee acknowledges the primary damage — that being done to others by Christians, but his focus here is on the secondary damage. He’s talking about the damage done to the church as a consequence of its choosing to be a source of damage for others. He’s talking about the damage of allowing our faith to be reduced to a “thin, worn and crumbling veneer” laid atop a “shameful, refuted hatred.”

• Christians (understood to mean here heterosexual activist traditionalists) have become identified with actively pursuing the denial of rights and benefits to others that they themselves enjoy. In other words, the “Gospel” has been identified with the cause of self-benefiting social discrimination against a minority group, a losing hand if ever there was one.

• Christians, claiming to follow Jesus, have become identified as the chief enemies of gay and lesbian human beings (some of whom are also Christians), and of the moral and legal rights of lesbians and gays, whereas Jesus’ enemies tended to be people who performed exactly this kind of marginalization on the despised ones of their era.

• Christians have become known for a deeply distorted moral agenda by elevating the anti-gay cause to the top of their public ethics, and this in a world afflicted by war, hunger, ecological disaster and all manner of social injustice.

• Christians have alienated gays and lesbians and their families, friends, and sympathetic allies, driving many away from the love of Jesus Christ and contributing to the secularization of American culture. They have done a great deal to create hostility to the church and closed ears to the Gospel. The saddest cases are the church’s own rejected gay and lesbian adolescents and twentysomethings. They are legion.

I wish I shared Dave’s confidence that “self-benefiting discrimination against a minority group” is always a losing hand. In the long run, yes, the arc bends toward justice, but in the shorter run of a generation’s life-span, privilege using power to defend itself often succeeds. I’m not saying it’s not evil, mind you — “self-benefiting discrimination” against the powerless is pretty much the definition of evil — but in a fallen world, selfish evil isn’t always a losing hand.

But Gushee’s point there — that equating the Gospel of Jesus Christ with such “self-benefiting discrimination” is obscene — is dead on.

He predicts three likely ways Christians will respond to the recent Supreme Court decisions and to future victories for LGBT equality:

One is to dig in their heels and resist every step of the way, with continuing damages along the lines just indicated, and all this in an increasingly hopeless cause.

He doesn’t seem to be recommending that one. Because, again — evil.

Another is to draw a clearer distinction between church and state, and between moral and legal norms, deciding that the place to defend and practice traditional Christian beliefs about marriage is in the church, not the state.

Did I mention that Dave Gushee is a Baptist? You might have guessed that already based on that earlier bit chiding Christians who are “unable to tell the difference between the church and the state, or between the demands of their faith on themselves vs. the demands of their faith on those who do not share it.” This second, eminently Baptist, response seems to be part of Gushee’s prescription, but not the whole of it.

The third is to be open to rethinking the possibility that the core Christian norms of love, justice, and hospitality must be integrated with moral norms related specifically to sexual ethics.

Yes, please, a bit of that too, thank you.

I’m not entirely sure what moral norms could exist or survive dis-integrated from love, justice and hospitality, but that is the weird situation now facing much of the church. We’ve got some vague notion of “specifically” sexual ethics that somehow exists wholly apart from love, justice, hospitality and their corollaries and kin, such as consent, trust, fidelity, mutuality, magnanimity, honesty, kindness, joy, etc.

Those, somehow, are not regarded as integral to “sexual morality” or to Christian sexual ethics, which is what makes our idea of sexual ethics so confused and confusing — an arbitrary set of lines and laws and Rules for Other People. Clanging brass and tinkling cymbals.

The folks Gushee is desperately trying to reach here will likely view this third option as a call to something radically new, but really his call for “rethinking the possibility” here is an attempt to get them to remember something old — something that they seem to have forgotten.

July 4, 2013 6 years ago: This train
Recent Comments
61 Comments | Leave a Comment
"That seems worse than if he were a true believer. No clear way he can ..."
Carstonio Oops
"I looked in on "Please don't eat the chimpanzee."The illustrations for the vision... I think ..."
Shadsie May 21 Flashback: Southern Baptist shrimp
"I thought Sonic was supposed to be a hedgehog. *Checks* Hedgehogs have pointy incisors. But ..."
Marja Erwin Oops
"I need a pick-me-up, so here's some Art Nouveau beauty: three pitchers, three different themes.First ..."
Jenny Islander Oops
Browse Our Archives
Related posts from slacktivist