I apologize for an error in the most recent post in this series. I overestimated Buck Williams.

I assumed when the last scene ended that Buck had finally understood the clumsy, obvious Bible Code spoken by the Two Witnesses in this story. Moishe and Eli had told him, repeatedly, that he would find his friend Tsion Ben-Judah in Galilee — even repeating this message to Buck telepathically. (In Tim LaHaye’s Bible prophecy world, Moses and Elijah are telepaths, as any literal reading of the Bible clearly says.)

I thought it was impossible for Buck not to pick up on that. But this is Buck Williams we’re talking about — not picking up on things is kind of his trademark. I suppose the telepathy only confused him further. They should have tried telephony instead.

Thus we return to find Buck exactly where we left him, dimly trying to grasp what the Witnesses are saying:

Buck stood riveted before the witnesses as the sun went down. He looked around to be sure it was still just him and them, “That’s all I get? He’s in Galilee?”

Again, without moving their lips, the witnesses spoke: “He who has ears to hear, let him hear.”

Using telepathy to tell someone to “use your ears” really doesn’t make much sense. It’s like a telepath saying, “Read my lips.” 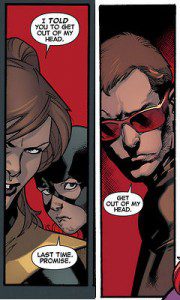 I sympathize with Buck a bit here. He’s just trying to get a straight answer, but the Witnesses can’t give him one because they’re unable to speak except by quoting unrelated snippets of Bible verses. I’m starting to think that Eli isn’t short for Elijah, but for ELIZA — the early chatterbot computer program that recited lines from its scripts in a way that sometimes almost sort of mimicked human conversation. ELIZA was pretty crude, but it had a better shot at passing the Turing Test than Moses and Elijah do here as they mechanically repeat the handful of Bible passages the authors allow them to say.

In nimbler, more biblically literate hands, this device of speaking only in Bible quotations might have been effective.* The problem here is that Tim LaHaye and Jerry Jenkins are dispensationalists — meaning they’ve “rightly divided the word of truth” in a way that allows them to focus only on the supposedly “prophecy” related parts that interest them. With such a limited segment of scripture to draw from, the authors wind up making their Two Witnesses sound like a 1960s computer program, or like tourists using an abridged, religious version of the Hungarian phrasebook from Monty Python.

This clumsiness is a bit of an obstacle for poor Buck. He’s trying to find one man who’s gone into hiding, and “Galilee” — the name of a large region — doesn’t really help him very much. Plus, he’s Buck Williams, so this vague direction helps him even less than it might help someone less dim.

Galilee? Did it even exist anymore? Where would Buck start, and when would he start? Surely he didn’t want to be poking around there in the night. He had to know where he was going, have some sort of bearing. He spun on his heel to see if any taxis were in the area. He saw a few.

Galilee is still a commonly used name for the region in northern Israel and for the Sea of Galilee itself, a large freshwater lake also known as Lake Kinneret. It’s kind of hard to miss.

“Did it even exist anymore?” is an odd thing for Buck Williams to be wondering. He’s supposed to be a sophisticated, jet-setting world traveler and someone who is intimately familiar with Israel, a country he’s visited numerous times. This is a bit like having Buck — who’s also supposed to be a savvy New Yorker — wondering to himself whether or not Connecticut even exists anymore. (Come to think of it, that’s actually a more reasonable question, what with the Antichrist having recently nuked much of North America off the map.)

One gets the sense here that it’s not just the character, Buck Williams, who is wondering this, but also the authors themselves. And, again, that’s odd. I’m sure that both authors have visited Israel themselves, and the Sea of Galilee is an almost mandatory stop for us Christian Americans when we tour the Holy Land. (We swim in the lake, then have a worship service along the shore at which someone sings, “I Walked Today Where Jesus Walked.”) Tim LaHaye, like most American preachers in the End-Times racket, has led tour groups in Israel (note Days 6 & 7 of the itinerary for one recent such pilgrimage).

But then here — and even more so in the pages ahead — we’re given passages in this book that seem wholly unfamiliar with the geography of Israel and that portray it in implausible and impossible ways. (Wait until we get to how Buck eventually travels to Galilee and you’ll see what I mean.) It’s all just … odd.

Buck seems tempted to hail a cab and tell the driver, “Galilee — and step on it!” But until he knows more about where that is, how would he be able to tell he wasn’t overcharged for the trip? He decides he still needs more information.

He turned back to the witnesses. “If I came back here later tonight, might I learn more?”

Moishe backed away from the fence and sat on the pavement, leaning against a wall. Eli gestured and spoke aloud, “Birds of the air have nests,” he said, “but the Son of Man has nowhere to lay his head.”

Buck was frustrated. “I’ll come back at midnight. I’m pleading for your help.”

Eli was now backing away too. “Lo, I am with you always, even to the end of the age.”

And now I must apologize again — this time to Joseph Weizenbaum of MIT, the creator of ELIZA. His program sounded far more like a real human than the Two Witnesses in this book do. Buck would have been better off consulting a Magic Eight Ball.

The scene ends with Buck no closer to finding Ben-Judah, but at least he has scheduled a second consultation with Moses and Eliza, and that promises to be just as fruitfully informative as this first session.

Buck left, still planning to come back, but also strangely warmed by that last mysterious promise. Those were the words of Christ. Was Jesus speaking directly to him through the mouths of these witnesses? What an unspeakable privilege!

Earlier, Buck was completely unimpressed that Deutero-Isaiah had spoken directly to him in the same indirect way of speaking directly. And, of course, “these witnesses” are themselves none other than Moses and Elijah — yet Buck doesn’t seem to think speaking directly to them is an “unspeakable privilege” either.

Buck doesn’t seem to realize, though, that “He who has ears to hear, let him hear” is also the words of Christ. So when he cut off Eli just now, was Buck directly interrupting Jesus himself? And when Eli quoted those words of Christ as a way of telling Buck to shut up and go away, it was as though Jesus himself was telling Buck to get lost. What an unspeakable privilege!

* Consider, for example, the way the Gospel of Matthew uses this device in the curious story of Jesus’ temptation in the wilderness. (Curious because Jesus isn’t the one telling this story, but he’s the only one who could, since no one else was there to see it.) That story features a character who speaks almost entirely in carefully chosen quotations from scripture, and it works there. In Matthew, of course, the Bible-quoting character is Satan, not Moses, but the device is much the same.

Here in Nicolae the device seems so clumsy that I keep thinking of the old joke about the “spirit-led” preacher who asks for direction from God as he repeatedly opens his Bible at random. That joke would work in this scene:

MOISHE: He is going before you into Galilee. There you will see him.

ELI: I know whom you seek. He is not here. He is going before you into Galilee.

BUCK: So is he here then?

MOISHE: Behold, I have told you.

ELI: He who has ears to hear, let him hear.

BUCK: I’m just not following this. Just tell me, specifically, what I’m supposed to do.

MOISHE: And Judas went out and hanged himself.

ELI: Go thou and do likewise.

MOISHE: What thou doest, do quickly.