1. Can a good tree bear deadly fruit? The Registered Runaway looks at the International House of Prayer. 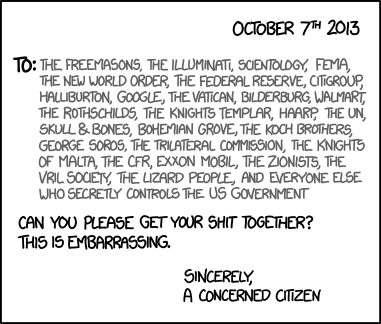 Thanks, guys — thanks for costing me hundreds of dollars in maintenance and transportation charges in exchange for saving me several dollars in taxes. What a bargain!

4. Smell the freedom: Dahlia Lithwick on “Conscience Creep” and the way that “conscience clause” and “religious liberty” arguments are increasingly being used to privilege institutions over individuals and employers over employees. This argument is being advanced by those who believe “some consciences are more important … than others” — and they’re fighting to have that privilege and imbalance written into law.

5. David Cramer on “Why (Most) Complementarians Should Be Pacifists.” I half agree. I suppose that it would be marginally “better” for those who apply a flawed hermeneutic to do so consistently, rather than arbitrarily or only when convenient, but the better response would be to abandon the flawed hermeneutic for one that can be sustained and applied consistently.

I sometimes make an argument similar to Cramer’s by pointing out, for example, that the Bible has more clobber texts prohibiting interest than it does allegedly prohibiting “homosexuality.” But I’m not trying to get anti-gay Christians to adopt Islamic banking practices, I’m trying to get them to affirm the logic of their reinterpretation of the prohibition against “usury” and to apply that same logic to the supposed prohibition against “homosexuality.”

6. “There are two types of people in the world: Those who can extrapolate from incomplete data sets” (via Jay Lake)

I’m actually glad that Montgomery’s city seal still celebrates it as the cradle of the Confederacy, and that the Party for Freedom is displaying the colors that flew all across the Netherlands as its Jews were being shipped to the gas chambers. These are the true tokens of historical memory. We shouldn’t bury these symbols; we should be teaching them to every kid in Alabama and in the Netherlands. Every child in Alabama should read the state’s 1861 article of secession: “Whereas, the election of Abraham Lincoln and Hannibal Hamlin to the offices of president and vice-president of the United States of America, by a sectional party, avowedly hostile to the domestic institutions and to the peace and security of the people of the State of Alabama…” What beautiful, twisted mendacity, to use the phrase “domestic institutions” to denote the enslavement of black people! Every child in the Netherlands should watch the Nuremberg-like rally held by the NSB, a mere month after the German conquest, in which they sanctimoniously mourn the fallen Dutch soldiers as “victims of treachery” — the treachery, that is, of the Dutch government and royal family, for sending them to fight against their German brothers. Children should be taught how lies like this work, and how often their own countries have been the source of the lies. If Montgomery’s city seal, and the prinsenvlag, help bind these thoughts to our foreheads, then by all means let’s keep them in circulation.