Joe describes it as “chilling,” and it may also be triggering, due to its heartbreaking, disturbingly realistic portrayal of bullying, bystandering and despair:

That’s a familiar story to anyone who reads the newspaper. Or to anyone who is familiar with — or has experienced — the cruelty of bullying and the power dynamics of high school.

It’s also a familiar story for anyone familiar with the Christian gospel. It’s something of a passion narrative, or at least a story involving a Girardian scapegoat. 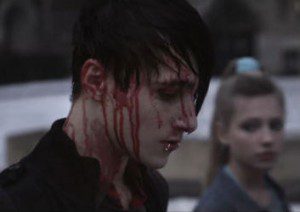 The video above, by Kai Staenicke, was honored as Best Short Film About/For Youth at the Auburn International Film Festival. Watching it, I couldn’t help but think of that epic New Zealand PSA “Who Are You?” with its similar indictment of by-standerism. I wanted this video to follow its lead, rewinding back to all those places where the mother, the teacher, the would-be friend failed to act. I wanted to see them intervene, stand up, reach out, say something, do something to change this story.

The Hidden Cameras are a “very gay” band, I came across this video thanks to a gay blogger, and the song itself is called “Gay Goth Scene.” Given all that, it’s certainly fair to interpret this story as that of a gay teenager (and perhaps also of his sometimes-boyfriend). But note that the story itself never says this. The “gay goth scene” of the song’s title is an epithet directed at this boy by others — by bullies, by Heathers, perhaps by the boy’s otherwise absent father. Is he actually gay, or is that just something they call him because he doesn’t fit in? It doesn’t really matter — not to this story, and not to any of those tormenting him or abandoning him.

And it shouldn’t matter to us, either. We often talk about things like “solidarity” or “intersectionality” as though these were lofty ideals. Or as though they were optional. But solidarity is desperately practical and necessary. And bullies — the oppressors, in biblical language — have always been intersectional. Oppressors aren’t interested in making distinctions between goths and gays and gay goths. Any illusion they create of a hierarchy of their targets is only that, an illusion.

It’s not possible to stand with only some people against the bullies, or — to use that theological language again — to share in God’s preferential option for only some of the oppressed. Any attempt to do that means accepting the bully’s bargain, so vividly portrayed in this video: Either join them in casting stones, or become a target of those stones yourself.

That bargain means there’s rarely ever such a thing as an innocent bystander. “Who are you?” that Kiwi PSA asks. Or, again in biblical language, “Am I my brother’s keeper?”