A top aide for Republican Senate candidate Steve Lonegan was forced to resign after arguing that Lonegan was closing the gap against Democratic candidate Cory Booker because, well, because Booker didn’t objectify women and that must mean he’s like, gay, or something.

That’s not exaggeration for humorous effect. That’s really what GOP strategist Rick Shaftan said, criticizing Booker for the Newark mayor’s friendly exchange of tweets with a woman who works as a stripper on the other side of the continent. Shaftan said Booker sounded “like … a gay guy” because he didn’t say the kind of appalling things that Shaftan — as a good, manly Republican — would have said.  (I can’t do justice to the full bro-douchery of Shaftan’s comments, but I really don’t want to reprint them here. So here’s the link — NSFW, misogyny, homophobia, etc.)

It’s not a good sign for the Lonegan campaign that the best they can come up with to attack Cory Booker is to say that his Twitter exchanges are insufficiently lurid and sexual. And it’s deeply weird that they’d try to make that a criticism — especially just a few weeks after Anthony Weiner’s train-wreck of a campaign just across the river.

The special election in New Jersey is this Wednesday, but Booker’s campaign was suspended for part of last week due to the death of his father. He resumed campaigning on Saturday, but described himself as “emotionally raw” in an interview with Hunter Walker for Talking Points Memo.

Walker asked Booker about Shaftan’s comments. His response is worth quoting:

You pray for those who seek you harm and ill and I sincerely do. And I sincerely pray that both he and I grow in our capacity to empathize and love. We all need to do that and he and I are no exception to that. … 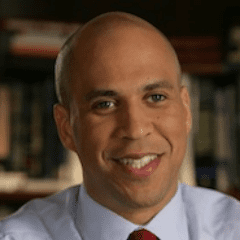 Just imagine being an 18-year-old woman reading that, an 18-year-old high school senior reading that. … When he talked about what it means to be a man. Imagine being a kid being bullied in high school by people who are beating him up saying the same thing. And so, I learned a lot that words have a very powerful effect, especially (from) people who are in positions of authority.

… So, I think those words were hurtful, and demeaning, and deeply unfortunate, but a reflection of a narrow group of thoughts about our society that I hope we as a chorus of conviction and consciousness in our community can condemn. But I condemn them in a way where — I honestly and sincerely say this on a day that I’m more emotionally raw — I just pray for him and I pray for all of us. May we all elevate in our love.