Don’t bother trying to be ashamed about your privilege, because you’re right, it’s not something you can help. But also don’t whine about the terrible burden it places on you. Don’t develop a persecution complex, as if all of the peons of the world are taking valuable time out of their day to judge you for your handbag. It would be great if you could acknowledge your privilege and find a way to leverage it on behalf of people who don’t have any — volunteer work, advocacy, donations, something. But even if that is completely beyond you, stop whining. Because no one cares that your 1,500-thread-count sheets are too slippery, and if you keep moaning about how hard it is to be rich, people really are going to hate you. 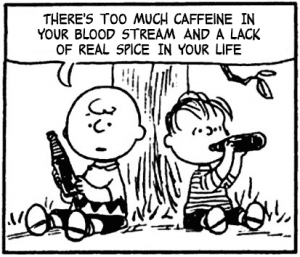 2. Jenn Lindsay has some thoughts on “Why Religion Should Not Try So Hard to Be Cool.” It’s the trying that dooms them. Nothing is less cool than trying to be cool.

3. Jeff Dunn writes about “My Trouble With Scripture“: “Evangelicalism — at least where I have been in evangelicalism in my life — has obscured the Word of God by focusing on the scriptures themselves.” I don’t think this is particularly his trouble.

4. Which is more surprising: Hearing Patti Smith tell an audience of children in 1979 that when she was a kid she wanted to be a missionary? Or hearing her say “I want to sing ‘You Light Up My Life,’ and I know that’s a weird choice for me, but I like that song ’cause I think if you really get into the words it’s got a really great message”?

5. I’m not sure that R. Tod Kelly’s long look at the Men’s Rights Movement — “The Masculine Mystique” — tells us much that’s new about this creepy cesspool of misogyny and free-floating resentment. Kelly gamely tries to find some reasonable “moderates” in the movement, clarifying that anyone either reasonable or moderate wouldn’t want to be anywhere near that “movement.” The best he can come up with is one guy’s agenda regarding counter-productive debt-collection processes used against dead-beat dads in arrears on child support. It’s a legitimate issue, and one that feminists — the very same feminists so hated and opposed by even “moderate” MRM boys — have been addressing for quite a while.

6. John MacArthur’s astonishing claim that his blanket condemnation of charismatic Christianity was a “loving” act recalls the importance of understanding the odd way that the term of art “love” is used by fundamentalists. Timothy Swanson nicely summarizes what these folks mean by “love” in a guest post at Defeating the Dragons, “Learning the words: love“:

THUS: Love for a person is expressed by telling them to follow the fundamentalist rules.

7. BabyBlue Anglican directs our attention to this pre-royal-baptism video from Archbishop Justin Welby which is, as she writes, “a warmly accessible introduction to what baptism means.”

(Welby is discussing infant baptism as practiced by a state church. That corresponds to soul freedom about as well as I think England’s hereditary royalty corresponds to democracy, but I suppose that just as the Brits have figured out how to have democracy while preserving their constitutional monarchy, the Anglicans are figuring out how to preserve their established religion with freedom of conscience.)