The Apocalypse of St. Peter (Garrett)

“Bible prophecy” teaches gullible Christians to mangle the words of the Bible. So I guess it’s not surprising that those poor folks would turn around and apply the same interpretive method to the songs of Midnight Oil and of 1980s hair band Europe.

For those who can’t watch the video, it’s an earnest word of “prophecy” from a man who has apparently bought the deluxe package of bamboozling BS from the “Bible prophecy scholars.” He’s sure that the Rapture will occur this year, in 2013, because God spoke to him through a Midnight Oil song and told him “the time has come.” This prophetic message from God was confirmed to him by another good Christian whom God spoke to through the same song, and then confirmed again by yet another believer to whom God spoke through the song “The Time Has Come,” from Europe’s Final Countdown album. (Did they have another album besides that one?)

I never realized that “Beds Are Burning” was about the Rapture. I always thought it was about justice for Australia’s indigenous people — but then I also thought that John’s Apocalypse was about the late-first-century Roman Empire, so what do I know?

The poor guy in the video above, bless his heart, is not wrong to detect something apocalyptic in the music of Midnight Oil. Apocalyptic was kind of their thing. Their catalogue is filled with apocalyptic warnings and old-school prophecy — not the fortune-telling, Nostradamus parlor-tricks of predicting the future that Tim LaHaye et. al. think of as prophecy, but the emphatic justice-or-judgment message of the actual biblical prophets. “Your dreamworld is just about to fall” — that’s apocalyptic. “In the end the rain comes down … washes clean the streets” — that’s apocalyptic. “The sunset empire shudders and shakes” could almost come from the book of Revelation itself. That’s from “Sometimes” — which is the essence of apocalyptic:

The empire is falling, don’t give in. Apocalyptic in a nutshell. 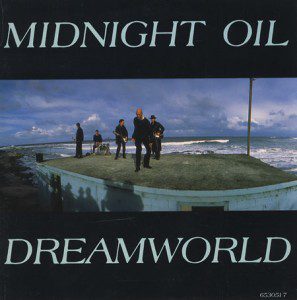 The fascinating thing about that earnestly awful “prophecy” YouTube post at the top here is the way the poor guy so perfectly replicates the way that “Bible prophecy” Christians distort and dismiss the meaning of apocalyptic literature, twisting it into something wholly unrecognizable. This guy does to Midnight Oil precisely the same thing that Tim LaHaye does to the book of Revelation. He clips a phrase out of context, tosses away the rest, and then pretends that phrase means something that the text itself never mentions at all.

The guy says God spoke to him, giving him the phrase “the time has come.” And for him that phrase can only mean one thing: the Rapture. He heard the song, but he refused to listen to it, completely ignoring its urgent, passionate cry for immediate, tangible justice. (Here’s a bit of personal background on Midnight Oil’s lead singer, Peter Garrett, that suggests “Beds Are Burning” expressed the strongest imagery he could imagine.)

Justice gets set aside, replaced by talk of the “Rapture.” But the song doesn’t say anything at all about the Rapture. Neither, for that matter, does the book of Revelation.

(Happily, our friend’s YouTube prophecy has only been viewed about 20,000 times since he posted it back in August, so his theory that “Beds Are Burning” is really all about the Rapture hasn’t yet wormed its way into conventional wisdom the way the LaHaye/Scofield/Darby/Lindsey nonsense has. So we’ll probably never hear cable news reporters glibly parroting the idea that this is “Midnight Oil’s hit song about the Rapture” the way that they thoughtlessly, incorrectly love to repeat that Left Behind is “based on a literal reading of Revelation.”)

This is always the pattern with “Bible prophecy.” This is how they always mangle and misread apocalyptic literature. Ignore injustice. Ignore context. Pretend everything is about something it never mentions. Then breathlessly predict the imminent “Rapture.”

But what about thosee multiple “confirmations” of this guy’s prophecy? How should we regard them?

I’m holding out for additional confirmation. Somewhere, another brother in Christ is listening to Lionel Ritchie’s “All Night Long.” Somewhere a sister in Christ is listening to “Pikachu’s Goodbye” from the Pokemon soundtrack. And other brothers and sisters are hearing “So Long, Farewell” from The Sound of Music, or U2’s “Kite,” or (if they speak Swahili) “King of Pride Rock” from The Lion King. And perhaps all of them will also decide that God is speaking to them through those songs to give them all those same prophetic words: “The time has come.”

And surely that must mean the Rapture is at hand. “The time has come” — what else could it ever possibly mean?

“The time has come,” the Walrus said,
“To talk of many things:
Of shoes and ships and sealing-wax —
Of cabbages and kings —
And why the sea is boiling hot —
And whether pigs have wings.”

October 30, 2013 Postcards from the culture wars
Recent Comments
0 | Leave a Comment
""Diplomacy is the art of telling people to go to hell in such a way ..."
reynard61 9/23 Flashback: ‘It’s a mystery’
"I disagree only in who the We who set off nuclear weaponization is. That is ..."
Dan Audy 9/23 Flashback: ‘It’s a mystery’
"I truly hope this comment was in service of trying medication to deal with said ..."
Dan Audy 9/24 Flashback: A perfect text casteth ..."
"As it happens, Tumblr has been doing a re-read of Dracula that is paced according ..."
Jenny Islander 9/25 Flashback: Discounted
Browse Our Archives
Related posts from slacktivist