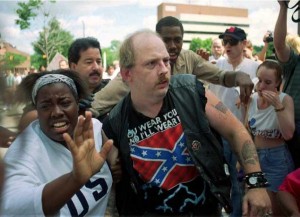 2. Eshet chayil. The woman in the picture to the right is Keshia Thomas. The man in the photo, who is believed to be a klansman, wound up on the wrong side of the fence between a Ku Klux Klan rally and a large crowd of protesters in 1996 in Ann Arbor and things turned ugly. Thomas shielded the klansman with her own body, then dragged him to safety.

Mark Brunner, who took this photo (and several more here) believes that Thomas saved the man’s life: “She put herself at physical risk to protect someone who, in my opinion, would not have done the same for her,” he said. “Who does that in this world?”

3. David Simon saw 12 Years a Slave. He says it’s good. “This much truth can grow an honest soul.”

5. The History Channel can’t help itself, so it’s upcoming series on the Bible is called “Bible Secrets Revealed.” Fortunately, though, those “secrets” turn out to be mostly the kind of stuff one studies in seminary — the history of the text and its historical context. Bob Cargill, James McGrath and Candida Moss are among the impressive list of serious scholars interviewed for the show. That’s the good news.

The bad news is History Channel. Cargill hopes the show lives up to its promise as a “scholarly look at the difficult texts and traditions within the Bible.” But, as vorjack notes, it’s also “produced by Prometheus Entertainment, makers of such fine scholarly works as Ancient Aliens and Kendra On Top.” So we’ll see.

6. From Bread for the World, “Scary Days Ahead for Food Stamps”:

Today … the additional Supplemental Nutrition Assistance Program (SNAP, formerly food stamps) benefits that were included in the 2009 Recovery Act run out. Every household that receives food stamp/SNAP benefits will be affected – about 48 million people. For a family of three, the reduction in benefits means a loss of roughly 16 meals per month.

This will play out in predictable ways. Parents will cut back on meals first to spare their children from going without. Nationally, the food insecurity rate for children is 21.5 percent, and in some states, it climbs to 30 percent. There is only so much cutting back that parents can do. Hunger and food insecurity rates for both children and adults will increase.

The U.S. is not one of those 15 countries. Despite great wealth and technological know-how, and despite more than 12,000 miles of coastline, the United States still doesn’t have a single offshore wind facility.

Meanwhile, the billionaire industrialist Koch brothers have spent about $5 million over the past decade to fight the Cape Wind project off the coast of Massachusetts. That’s partly because one of the brothers owns three mansions with views of the Nantucket Sound and he’s worried that the project would ruin the view from his windows should he ever choose to gaze at the horizon with high-powered binoculars. And it’s partly because renewable energy threatens the billions of dollars the Kochs hope to reap from the Keystone XL pipeline.

Progressive Christian
Jan. 26 Flashback: It's all about pretending
slacktivist