Perversely insisting you like the unlikable doesn’t make someone else a liar November 6, 2013 Fred Clark

Q: How many legs does a dog have if you call it’s tail a leg?

A: Four. Calling it’s tail a leg doesn’t make it one.

Most of the jokes Jon Stewart tells on The Daily Show are funnier than that one, but it’s not at all funny when Stewart contradicts the truth expressed in that joke and says President Obama is lying for not agreeing to count tails as legs. 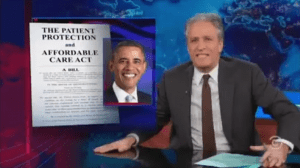 John Stewart just isn’t making much sense here. “The president has been somewhat dishonest about the promise of his health care program,” Stewart says, playing a long string of clips of Obama saying “If you like your plan, you will be able to keep it” as though this were a big “Gotcha” moment.

That’s not a gotcha moment and that’s not “somewhat dishonest.” It’s true: “If you like your plan, you will be able to keep it.”

But what about those people whose old plans no longer exist in that same form because of the health reform law? Well, that’s only true for those old plans that were basically screwing over customers. The new law doesn’t let insurers do that anymore.

So, no, if your old plan was screwing you over, you won’t be able to keep it.

Here’s the “Gotcha” moment then: Ah, but what about people who liked getting screwed over by their old plans? They liked being ripped off, but they’re no longer allowed to be ripped off in quite that same way — therefore Obama was lying when he said “If you like your plan, you will be able to keep it.”

This is just weird.

“If you like your diet, you will be able to keep it.” But we’re no longer going to allow people to sell you a plate filled with broken glass and feces and call it lunch.

But I liked my broken glass and feces! If you won’t let me keep paying top-dollar for that, then you’re a liar!

Seriously, I’ve come to expect this level of journamalism from Politico and cable news pundits, but it’s disappointing to see The Daily Show parroting such strangeness.

In what sense was Obama’s statement — “if you like your plan, you will be able to keep it” — “dishonest”? I suppose the criticism is that the president failed to account for the possibility that some customers would be eager to redefine “insurance plan” in a way that allows it to refer to an expensive scheme that denies them insurance. Such redefinition is certainly dishonest, but the dishonesty is not on Obama’s side of the ledger.

I suppose one could argue that Obama ought to have anticipated this response. He ought to have realized by now that polarized partisan attitudes have pervaded all of our lives and culture, and that a big chunk of the public seems to have embraced such a knee-jerk antipathy to anything he says that they’re no longer concerned about reality or the concrete meaning of words. In such a context, Obama probably should have foreseen that some people would insist that they like eating feces and broken glass, and that they’d prefer to keep eating that instead of paying less for a more palatable meal of actual food.

Obama, in other words, ought to have realized that others would lie and that still others would eagerly swallow those lies. But his failure to insulate his otherwise accurate statement from the challenge of those lies does not constitute a lie on his part.

Shit and shards are not a meal. And no matter what some people are happy to pretend in an attempt to score political points, no one really “likes” eating it.