Good news for the people of Illinois and the Constitution: “Illinois lawmakers approve gay marriage in historic vote.”

Lawmakers approved gay marriage Tuesday in a historic vote that saw supporters overcome cultural, racial and geographic divides and put Illinois in line with a growing number of states that have extended the right to wed to same-sex couples.

… Gov. Pat Quinn said he intends to sign the bill, which would take effect June 1. 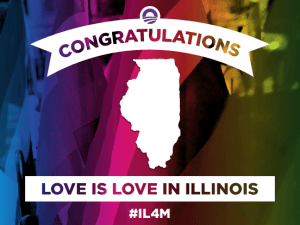 After a long slog and several false starts in Illinois’ legislature, the bill passed in the state House last night and was quickly reconfirmed by the Illinois Senate and sent to the governor, whose signature will make Illinois the 15th state to legally recognize marriage equality.

The surprising speed of this vote in Joshua Speed’s old hometown has sunk my marriage equality office pool — I’d picked Hawaii for No. 15, New Mexico at 16, and then Illinois. Since I’m clearly no good at guessing the order of these things, I won’t speculate about which will come first, but Hawaii and New Mexico are poised to join Illinois before the end of this year, or perhaps before the end of this month.

After a long and contentious hearing process — including 57 hours of testimony and a clumsy attempt at a “people’s filibuster” by marriage equality opponents — Hawaii’s House Judiciary Committee finally voted yesterday afternoon, passing that state’s marriage equality measure and sending it to the full House for a vote:

If the bill passes its second reading in the House [today] there will be a 48 hour hold before House Representatives take a third reading and final vote, which would be Friday at the earliest. Since the bill has been amended, it still needs to cross back over the Senate for approval.

If passed, Hawaii’s law would take effect Nov. 18 — a week from Monday.

Eight counties are issuing marriage licenses to same-sex couples, and the state Supreme Court is considering a lawsuit on whether gay marriage is legal statewide. State law doesn’t explicitly authorize or prohibit gay and lesbian couples from being married.

Courts are supposed to stick to the law when making their decisions. It’s hard to imagine any credible way for a court to rule that something which is not illegal is still somehow not legal. (“All that is not explicitly permitted is therefore forbidden” is not how the law is supposed to work.) So this should be a swift and easy decision, and it’s also expected soon.

The dead-enders in these states are not going quietly or graciously. In Illinois, for example, we learned that Republican state Rep. Dwight Kay is astonishingly ignorant about the U.S. Constitution:

“The other thing I didn’t hear today was the fact that this nation was built on the scriptures,” he said on the House floor. “And then came the Constitution. Is that not right?”

“I think it is,” Kay continued. “Our Constitution has always looked to the scriptures for its guidance and its columns and its foundations and its leanings, its underpinnings. And, yet, I’ve heard nothing today about the scriptures. The only thing I have heard is about human rights.”

“So I guess we have walked away, we have backed away from our heritage in this nation, which we seem to do quite regularly for the expediency of what we wish to do in the moment,” he remarked. “And, ladies and gentlemen, that’s pride. That’s the belief you’re better than the very foundations of this nation which we find in the scriptures.”

Rep. Kay didn’t say which “scriptures” he was referring to, so let’s look at the Constitution and see which scriptures it cites. … Hmm, nothing there. Nothing at all. Only a couple of mentions of religion in the entire document.

It says “no religious test shall ever be required as a qualification to any office or public trust under the United States.” And it says, “Congress shall make no law respecting an establishment of religion, or prohibiting the free exercise thereof.” But the Constitution doesn’t say anything about being based upon “the scriptures.”

Rep. Dwight Kay seems to be talking out of his ass, and his ass has apparently been watching too many David Barton DVDs.

Kay is almost as confused about the law as Tenari Maafala, the head of Hawaii’s police union, who testified before Hawaii’s House Judiciary Committee that he would never enforce the legal recognition of marriage equality. “You would have to kill me,” the melodramatic fantasist-with-a-badge said in an apparent attempt to say the most absurdly self-aggrandizing thing he could think of.

Set aside the question of whether Maafala is qualified to be a police officer, since he seems to think he’s allowed to pick and choose which laws to enforce. The weirder thing about his flaccid defiance is that it’s based on the notion that marriage in general is something that needs to be enforced by the police. Perhaps you’re married. If not, perhaps you know some people who are married. Can you recall any time in which the police were summoned to “enforce” the law recognizing the legality of their marriage? “Hello, 9-1-1? Yes, this is Mrs. Jones. We need you to get over here right away to enforce the legality of our marriage. It’s our anniversary and we can’t celebrate unless the police …” Bizarre.

Hawaii state Rep. Bob McDermott provided another dead-ender lowlight in those hearings. McDermott seemed eager to trot out the anti-gay zingers that had gone over so well with his buddies at the Men’s Leadership Prayer Breakfast. They didn’t go over quite so well when he tried them out on Harvard geneticist Dean Hamer. Science, schmience — McDermott’s not gonna [change] his tune just because of elitist facts and pointy-headed reality and all that Ivory Tower stuff.