‘Noah’s workshop’ should not look like the Renaissance Fair

Ham’s young-Earth creationist con has raised more than $13 million of the $24.5 million he says it will take to build his full-scale “replica” of Noah’s Ark, and he’s looking to bilk supporters out of the remaining $12 million by having them sign up for monthly pledges as “sponsors” of every peg, board and beam of the project — that’s $10/month to sponsor a peg, “as low as” $100/month to sponsor a plank, and “as low as” $500/month to sponsor a beam. “Your tax-deductible sponsorship donation will be assigned a unique serial number that you can use to look up the location of your peg, plank, or beam in the Ark.” (The book of Genesis says that every board in Noah’s Ark had a unique serial number. I forget the exact verse where it says that.)

So, for $6,000 a year you could “sponsor” a wooden beam on a replica of Noah’s Ark in Kentucky. Or you could use that same $6,000 a year to sponsor 15 desperately poor children through World Vision. These are, obviously, equally valid uses of that $6,000 for a good, godly American Christian.

Ken Ham has produced a video update of “Phase 1 of the Ark Encounter,” featuring someone named Patrick Marsh, who takes obvious delight in playing with his tiny trees and parking lots in the scale model of the project. (I do not begrudge him this. The scale model looks fun and I found myself wishing Marsh had included a train set running through, because that would be kind of neat.)

There is so very, very much wrong with all of this — theologically, exegetically, historically, ethically, etc. — that it seems inappropriate to fixate on any one thing, but I find the “blacksmith shop” particularly infuriating. 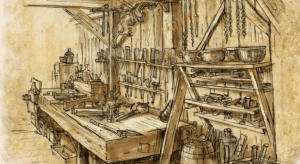 The Ark Encounter will include a model of Noah’s “workshop,” which will include, Marsh says, “A working saw, vertical saw, and a blacksmith shop, because we want to show that Noah was capable of using all kinds of equipment and things to be able to build this wonderful ark.”

The image there to the right is the artist’s rendering of the Ark Encounter’s planned “Noah’s Workshop.” Note the medieval-looking ax, the array of chisels and planes, and the selection of various drill bits.

That very precise date is the year that Ken Ham’s Answers in Genesis gives as the date of Noah’s flood. That’s early in the Bronze Age. Some bronze saw blades have been found from that time, and even older — dating back to 2750 BCE or so — but they were crude metal squares, nothing like the Colonial Williamsburg-looking array of tools shown in the Ark Encounter’s workshop. Tools like those shown just didn’t exist in the Bronze Age.

But the Ark Encounter isn’t set in the Bronze Age. It’s set in the Iron Age.

How can this be? Answers in Genesis has given us an extremely precise date for Noah’s flood: 2348 BCE. That’s more than a thousand years before the very earliest hints of anybody, anywhere even starting to work with iron. Yet the Answers in Genesis folks say Noah had a full array of the best Iron Age technology, because they say the Bible says so. Genesis 4:22:

And Zillah, she also bare Tubalcain, an instructer of every artificer in brass and iron: and the sister of Tubalcain was Naamah.

Tubalcain was the son of Lamech, which makes him Noah’s brother. So if the Bible says that Noah’s brother was an “artificer in brass and iron,” then Noah must have lived in the Iron Age which must have started some time before 2348 BCE. And that is that.

My point here is not to nitpick about the anachronistic metallurgy of the Ark Encounter. Ken Ham claims that the entire universe is only 6,000 years old, so his mangled chronology of the Iron Age seems like a relatively minor problem.

Set aside the story of Noah and his ark. Imagine instead we’re just trying to create a museum display about a state-of-the-art shipbuilder ca. 2348 BCE. What kinds of tools would such an ancient craftsman have available? What tools have we discovered from that time period?

The Khufu Boat Museum, located behind the Great Pyramid in Giza, Egypt, has just such a display — including an actual boat built more than a century before Ken Ham says Noah’s flood happened. (Blogger Danee Gilmartin has some cool pictures of the ca. 2500 BCE felucca that was buried with King Khufu.)

This ought to be a fascinating topic, but the folks at Answers in Genesis aren’t fascinated by it. They’re not eager to learn more about ancient boat-building. They are, instead, terrified of it. For Ham & Co., it’s not that ignorance is bliss, but that ignorance is necessary.

What would happen if they started learning about ancient shipbuilding or ancient metallurgy? Even if they managed to somehow insulate themselves from everything that archaeology tells us about human culture and the world of long before 6,000 years ago, there’d still be enough within that 6,000-year timeframe to upend their whole ideology.

Tubalcain’s way-too-early ironsmithing would be the least of it. The bigger problem would be encountering all those ancient cultures like Khufu’s Egypt that thrived before, after and during the time of Noah’s flood — without any apparent interruption or disruption from any such allegedly global calamity. We can identify many civilizations that were thriving in 2348 BCE, and they were all still thriving in 2347 BCE too.